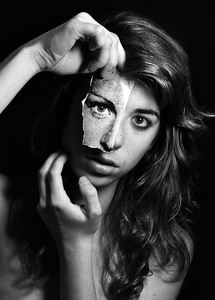 Loreal Prystaj is a visual artist based in New York City. She has spoken at accredited universities, such as NYU and The Fashion Institute of Technology, in Manhattan, NY, and has been commissioned to present her work for clothing store display windows, such as DAFFY’s.
Along with being actively represented in numerous galleries throughout New York City, her work has been exhibited around the world from California, Vermont to China and Japan. Prystaj’s work can also be viewed in the permanent collection of the Erie Art Museum, in Pennsylvania, since 2014.
In winter of 2015 she saw her first solo show take place in NY’s Lower East Side exhibiting venue Gallery Sensei, introducing her renowned series, "Being". Prystaj’s archive of work led to her being selected as a speaker at accounted photo stores, such as Adorama, in New York City (May 2014).
She has been published in CREEM Magazine, Icon, Niche, ArtBuzz , and DAZE earning mention for her various works. She will also be featured on the cover of this month’s issue of HUE Magazine (June 2015).
Loreal Prystaj continues to express her ideas through the eye of the lens as she expands her practices as an artist.