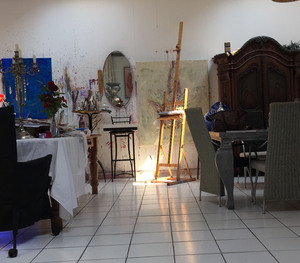 Peter Fitz
Director of the Municipal Gallery Museum Kiscelli, Budapest (till 2015),Organizer of international exhibitions on new places. Well known as curator of the Hungarian Pavilion at 51st Venice Biennial in 2005.

Marjan Derksen knows something that is extremely unique. As though she was writing - painting - a personal, sensual journal, where her identity as woman plays the primary role. Her works function as devices of temptation: beautiful bodies, pretty faces, busts, hearts, veils, strands of hair, a diverse variety of cosmetics and smart feminine devices that appear in her canvases almost in exaggerated amounts, accumulations. She often applies old photographs of courtesans of the past, of playful, alluring women. All this appears beautifully over-painted in the surface of the canvas. These surfaces are vibrant red and blue, or hues of their variants. The primary motifs are ornamented with thousands of details, abundant décor, Baroque-like, or eclectic motifs. This overwhelming dose of beauty, the richness of ornamentation is but a thin layer of the real body of work.

It is paired with a harsh, almost rude, overscribed intervention, that gives a quick twist to the meaning with its brutal red or blue streams of paint, powerful, blood-like spots. Love, passion and pain are present at once. These interventions are from time to time as brutal as the blood-smeared action canvases of the Austrian Hermann Nitsch. The blood-like streams of paint - red or blue - overscribe the idyllic, sentimental world of the basic situation, and turn it into painful suffering, tormenting passion. She creates the same ambivalence, even more dramatically, with the applications.
Broken glasses, pieces of glass smashed and raptured the sentimentally beautiful boudoir-world of real, or painted, sensual, feminine underwear, twisting the message to other dimensions.

The third decisive creative element of her art is writing.
This legible-or illegible texts are present in many of her works. Letters, journals, or just simple messages are somewhat reminiscent of hopelessly stranded people’s bottle-mails, on the other hand, they are decisive counterpoints that re-inscribe the meaning of a specific composition.
Most of the time we browse for a message in vain, which remains secretive and undecipherable for the spectator. Others are legible and their messages are always disturbingly personal. The titles of her works also fill an identically important role: they do not lack humour, eroticism, at the same time they are exceedingly serious, and she often gives two simultaneous titles to the same piece, opening space for interpretation.

He who wants love gets the pain as well, This free translation of an old Chinese proverb still appears to hold true. After centuries of use the words have not lost any of their power.
In fact, in relation to the work of Marjan Derksen the words only seem to gain strength. The inescapable tension between love and pain is omnipresent in her recent paintings. In this we should not just think of depicting human relationships. Both emotions can easily be justified to apply to life as well as art. Love for life, and love for art always come with a down side. There is no life without death. The impassioned artistic process seldom comes without struggle, pain and doubt.

The interaction between passion and pain threads through Marjan Derksen’s life. The impact of this is apparent in every painting. ‘Alle lust will Ewigkeit / will tiefe, tiefe Ewigkeit’ is what Nietzsche wrote in Zaratustra III. It is not difficult to relate this line from Das andere Tanzlied directly to Marjan Derksen’s most recent work, in which the essence lies in intense and vivid emotions. The artist paints from intuition. It is all about the ultimate translation of sincere and honest emotions into pure and impassioned painting. Not reason but emotion calls the tune. It is hardly possible not to be moved by the overpowering paintings in which scarlet, fragments of glass, a crown of thorns, hearts broken or cleft in two, crimson lips, deformed body parts are rule rather than exception. A confrontation with Marjan Derksen’s paintings inevitably results in a confrontation with life itself.. All aspects and nuances of passion and pain file past.

For Marjan Derksen not only the big themes are important. Her work is also about form, script and matter. Not just what she wants to convey is important but also how she does this. Those who have kept track of the development of her work will not find it difficult to recognize the use of script and imagery. Correspondences to earlier work are especially manifest in her use of materials and the special way of assembling, which is still characteristic of the method applied as well as the structure of the composition. In recent work, the use of textiles (ranging from different types of cloth to threads, yarn and pieces of string) is combined with a wide range of all sorts of materials (broken glass, feathers, paper, fragments of texts, photographs, etc.). Paint is used as a binding element. The individual parts of the assemblages are, as it were, united by the paint, held together, put within a fixed framework, moulded into a clear context.

In addition to the use of textiles, the text fragments are a remarkable and recurrent feature. Marjan Derksen likes to write in her paintings, and does so frequently. However, we do not come across anything we can read. Instead we find illegible handwriting that creates the impression we are dealing with diary-like entries. This association is not without any foundation. Actually, all the paintings together form a coherent autobiography. Each individual painting can be seen as an episode, a page from a diary in which a personal experience is reflected. The affinity with script is a concrete fact that guarantees a personal touch. It is equally important to observe that the artist manages to lift personal experiences to a higher and more universal level. No matter how vivid the emotions may be, they are not just part of the artist’s private domain, but are also universal, of all ages and hence timeless. That explains why an ancient Chinese proverb can still be updated through present-day painting. It is a fact that Marjan Derksen’s work is contemporary but at the same time we can observe that with her work she manages to traverse cultures, domains and time.

Apart from creating a personal connotation, the use of illegible text fragments also represents a literary reference. The relation to literature is more or less permanently present below the surface. Word and image follow naturally from each other. They are mutually intensifying. It is tempting to position Marjan Derksen’s art among that of literary giants such as Tolstoj and Shakespeare in terms of the way of thinking and scope. It can just as easily be parachuted into the works of Jean-Paul Sartre, Heinrich Böll, Philip Roth, Sándor Márai, Alberto Morovia or Gabriel Garcia Márquez. After all, her paintings deal with the big themes of life: birth and death, passion and pain, unconditional surrender and betrayal, light and darkness, love and hate. Contradictions are named and magnified as well as united. By emphatically zooming in on contrasts, frictions and conflicts the artist creates the tension her paintings need to touch the viewer directly and inescapably. They appeal to feelings and experiences that everybody can recognise and yet they are different and more intense as a result of the visual spectacle unleashed by Marjan Derksen.

The use of contrast ensures visual tension. Contrary to a pure aesthetic appreciation, contrasts do not just stimulate the eye but each of the other senses as well. This is exactly what Marjan Derksen wishes to accomplish. She brings about synesthesia in her work. All the senses are involved in the imaging process and the experiential world. Different areas of experience and perception are linked with each other. In addition synergy is an unavoidable phenomenon. This means that the whole equals more than the sum of its parts. In Marjan Derksen’s paintings synergy is manifest in the combination of pictorial elements which in their mutual coherence generate an added value. By emphatically focussing on the specific meanings of objects, forms and symbols (such as a heart, a crown of thorns, torn garments or broken glass) Marjan Derksen remains close to her feelings and close to the emotional essence. This makes her work recognisable and admissible for a large audience. In spite of the confronting nature of the paintings people can also draw hope from them.

Appreciation for Marjan Derksen’s recent work is booming. Exhibitions both home and abroad underscore that people are ready for violent emotions which sometimes cut right to the heart, but which also focus on the positive aspects of life. This duality completes the image and that is a message that everyone can visualize. Being granted the prize awarded by the public at the Palm Awards in Leipzig 2007 and a large exhibition in Milan (gallery Jean Blancheart) in the spring of 2008 are only two of the exploits which prove that Marjan Derksen is making an urgent and important appeal to the heart. With her enthusiasm she has laid the foundation for international recognition. Her breakthrough comes at the right time; passion and pain have met in a renewed balance. They complete and perfect each other just as yin and yang do. Les extrêmes se touchent. It is exactly because extremes have been united and given their own place in Marjan Derksen’s recent paintings that the picture becomes complete.

“Writings on the wall -Behind that Magic Wall”

Often one hears stories, stories of unknown luck with loads of profit, but we also know those who have lost far too much. Sometime you would like to understand the patterns or the 'reasons'. What is behind that magic wall??

“The Wedding Dress of Maria Callas”

“My Mirror- Looking into your past”

If you meet a new friend, you would like to know how his/ her life went. Where have you been, what has happened to you? Your golden moments, your tears, your life. You recognize your own story too.