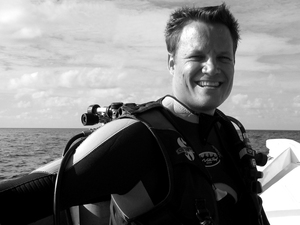 Henrik Welle was born in Paderborn, Germany.
From a young age, he developed an interest for the ocean and the animal world. After studying Marketing and Political economy for a few years in Hamburg, he pursued his true calling and realized, that he was happier in the water than on land.
Immediately after Discover Scuba, his passion for the oceans solidified. He left Germany and moved to Fort Lauderdale, Florida.
While in the US he perfected many diving specialties like; wreck diving, rescue diving, underwater photography and video, dive master, night dive, search and recovery, underwater communication, environmental research, Nitrox blending and rebreather.
He has over 400-recorded dives in several locations around the world. Some of those places include: Egypt, Maldives, Hawaii, Florida, Mexico, Venezuela, Bonaire, Turks & Caicos, Dominican Republic and Bahamas.
Henrik's passion for the ocean is unabated and he continues to showcase the underwater world through his photography.

Curiosity is one of the driving forces that brought humanity forward. On the other hand it might also be humanities demise, wanting to know everything.

The two man in suits are the forces good and evil pulling against each other. One can not exist without the other.
By having the rope snapped, balance is restored again.

The man in the suit signifies any- and everybody.
The multiple arrows, the bleeding out of the image resembles the pain and pleasure that love can inflict. Could it be that the usual, traditional, poetic scenario such as “love conquers all”, turned into punishment and torture of Cupid?!

The man in the suit symbolizes humanity and Gaia (mother earth) is taking her revenge.
Humans think, earth is our world but we are merely guests on this beautiful blue planet.
If we are loosing the respect for nature and keep mistreating her, we will eventual have to deal with the consequences.

For the body of work, "The Only Time", I used a model in a full suit. The pictures were taken underwater and mostly at night.

The "Agent of Time" represents anybody and everybody. The composition alludes to the past, present and future in which the agent deals with daily human challenges yet remains always in the only reality - the now.