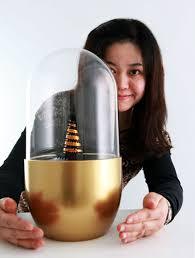 Sachiko Kodama was born in Japan in 1970.

As a child she spent a lot of time in the southernmost part of Japan.This area is rich in tropical flowers and plants, edged by the sea, and washed with warm rain. Sachiko loved art and literature from an early age, but also had a strong interest in science.

In 2000, Sachiko began work on a ferrofluid art project that she named “Protrude, Flow”.The main expressions of her ferrofluid sculpture can be seen in the generation of organic forms and movement using ferrofluid, to present growing forms, atrophy, rhythm, composition of curved surface and light, and other texture generation.
Furthermore, the contradictory nature of ferrofluid (hard/soft, beautiful/ugly, growth/atrophy, attraction/repulsion, and rise against gravity/fall due to gravity) can communicate similar contradictory concepts and ideas in living organisms.

My “Morpho Tower” series began in 2005 as the first realization of “ferrofluid sculpture”.