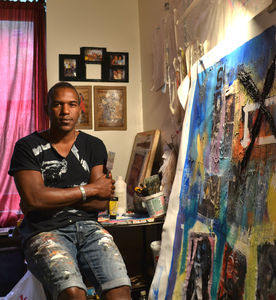 Jiménez Guerra’s work is mainly based on social and political issues and is informed by the culture in which he finds himself. From the beginning Jiménez Guerra was concerned with the way mass media is used to manipulate individuals — both in the past and in the contemporary context — driving us to accept stereotypes, especially those related to women. It’s through playing with and deconstructing stereotypes and ideas found in mass media that he finds his inspiration. He often uses recycled materials and other objects in his paintings to challenge commonly-held associations and provoke the spectator. Normally he works on large formats where he includes magazine and other pop culture images, graffiti, slogans, and found objects. Some of his work also uses silkscreen. Jiménez Guerra is fully committed to the role of Art in the society in which he lives, whether in his native Cuba or New York City, where he currently resides.

In this current portfolio will be featuring my latest works.

“Playing with Venus of willendorf”