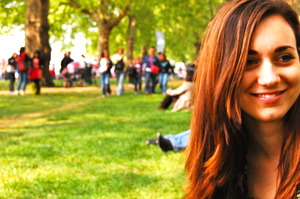 Kerry is a visual artist based in London, England.   Born in rural Ontario, Kerry moved to Toronto where she attended York University for her Bachelor of Fine Arts Degree in 2004. After graduating she backpacked throughout Peru, Bolivia and Ecuador before moving to England in 2008 to pursue her artistic ambitions.   She has exhibited in Toronto and London galleries and is currently apart of the exciting artistic group called Debut Contemporary in Notting Hill, London.

Kerry works in a variety of materials and styles including painting, drawing and stone carving which illustrate and reflect on her own life.  She finds inspiration from the places she has travelled to and lived in and uses her own artistic practice to visually explore each location.  The result is highly stylised work with intricate layers and details that capture an organic quality, which embody the natural rhythms and movements of the world.

Growing up surrounded by wilderness ignited a love for the environment that has broadened into the production of an array of cultural and nature themed works.  While older collections emphasized nature, landscapes and their living organisms, her current series explores urban scenes, architecture, light, line and space.

‘Reinventing the River Thames’ includes; The Anchor Brewhouse: The Calm Before The Storm, the Tate Modern: Miracles and Light Beams and The Battersea Power Station. The series has marked the beginning of a study of urban architecture, specifically focusing on Grade II listed buildings located along the River Thames. They are industrial built structures that have been or are in process of being reconstructed and reinvented into modern functioning spaces. They are iconic and well known and their histories are significant to Londoners and travellers. The collection aims to document their existence and reincarnation while also expressing the inner thoughts, feelings and emotions of the artist. Kerry uses black intricate details, cleverly hidden amongst the scenes to slowly unfold a story to the viewer.

“Anchor Brewhouse (The Calm Before The Storm)”

The 'Anchor Brewhouse (The Calm Before The Storm)' is a painting of a 17th Century converted brewery, located on the River Thames across from Tower Bridge. Kerry chose this building, in particular, for its significance to London through its history and reconstruction into luxury flats as well as her fascination with the design of the structure. The painting is portrayed from a view-point off Tower Bridge overlooking the building in all its grandeur, depicting a quiet, desolate moment before a dark thunderstorm rolled in, covering the city with cold rain and playful winds. There was an unforgettable silence on the bridge as the last glimpse of the sun faded away on the late sunday afternoon in April and the painting aims to capture this moment as well as the history of the place. In addition the work expresses personal emotions through the use of symbolism and calligraphy in black ink along the beach and the skyline. The narrative is thus not only about the building but also her personal life and the moment when they came together.

The painting is a triptych of the Tate Modern building in London which houses one of the largest collections of contemporary and modern art in the world.  The painting is done in watercolor, acrylic, pencil and black ink details. It is the second piece in a series of architectural paintings and drawings along the River Thames which depict the regeneration and preservation of grade II listed buildings.  It aims to capture the essence of the building, the location and the history, as well as a personal journey through the use of storytelling within the intricate black ink drawings, symbols and text along the boarders which separate the three images.

'The Brick Cathedral' is the third work in the series entitled: ‘Reinventing the River Thames'. The painting depicts a colourful night scene of the Battersea Power Station in London.