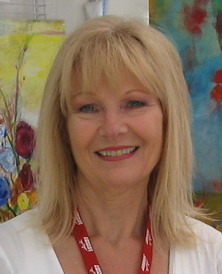 Self-taught painter, born in Belgium, and living in Quebec since 1966, Edith Liétar graduated in aesthetics, in color analysis, and in fashion design. She owned a fashion boutique, and worked as a consultant for fashion magazines.

For several years, she followed workshops with painter Anne Van Mierlo to perfect her techniques.

Her professional career has led her to Spain, France, Belgium and Holland. Her paintings are found in private and public collections in Quebec, Ontario, the United States, in Europe and in the Middle East.

Freedom is my style is her motto. She claims freedom to remain authentic, away from any current or trend; freedom to express the diverse facets of her personality thus making every painting unique. She draws on her life experience to paint, leaving her inner self guide her along the way. She strives to always push her art further so as not to be taken in by routine.

Her creations are contemporary, lyrical, optimistic and spontaneous, and convey to her abstract art a dreamlike vision.

Edith sees the artist as a magician whose strokes create dreams. Her wish is to make every painting a window open to the imagination of the viewer.