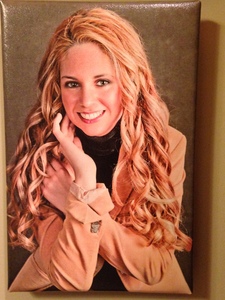 E.B.Schott (AKA Christine Traficante; AKA Christine Forster) was born in 1990 in Upstate New York. She was raised in

Christine sees the world differently than others see it since she is on the spectrum of autism. When she started school,

she was slotted into special education resource rooms of deep dark clouds of stagnation, temporarily trapping her

untapped creativity. She travels the world with her family and loves art, languages, music and dance. Christine picks up

languages quickly and speaks German fluently. After intense training in learning how to read, Christine started to read

at the age of twelve. The world began to open up to her and Christine built on her strengths, spontaneously writing

poetry. She wrote copiously. At the age of fifteen, she dropped her black pilot gel pen and decided to paint. She was

considered an outsider artist since she was not trained to paint. Her work has won prizes at FASST (Fine Arts of the

Southern Tier) and her art has been shown at the First Friday Art Walk, in Binghamton, New York for several years. Her

works are currently exhibited in Congressman Hanna’s office, Uncorked Creations and in private collections. Her next

shows will be at the Binghamton Public Library in March, 2015 and The Bundy Museum in May, 2015.

The paintings flow out of the artist’s brain via her fingertips utilizing automatist and dream elements. Christine

formulates, stores and then employs the array of her compositions in her mind’s eye as she rapidly executes her

creations on canvas. She paints with a sense of urgency in her deepest being. Many of her works are composed

simultaneously in her mind. She does not stop painting until her canvas is complete. Christine is a visual, kinesthetic,

universal, holistic learner and sees the world in pictures and numbers. She is a hands-on painter, needing to taste,

touch and feel her creations. She experiments with her palette composing her works of contemporary abstract

expression with multi-media incorporating oils, acrylics and encaustic. She is an ecofriendly painter using green

renewable objects. Christine is inspired by nature. Her deep emotions and soul are reflected in her work. She forges

onward and continually thinks outside of the realm of creativity.

Christine completed her first painting class at St. John’s University in the summer of 2012. She attained her Associates

degree from SUNY Broome in 2012 with high honors; was part of the NYS Chancellor’s Academic Team in 2012 and is

in the honor society, Phi Theta Kappa. She studied Studio Art and Art History at Binghamton University. She interned

and assisted the director of The Bundy Museum in curating art exhibits in the Spring of 2015. She interned at the

Christine is compelled to paint outside of the traditions of conformity. She sees her “disabilities” as gifts of “abilities”

that have been given to her. She believes that the art of creating helps the artist escape the pain of daily life and thus

heal the artist. Her artwork gives us all a glimpse of the varied, deep perspectives of life. You can see her work at her