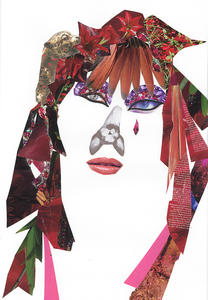 Kirsty McKenzie is a Canadian artist, and costume designer. She prolifically creates paintings, drawings, mixed media collages, costumes, interiors, performance, sound, and video installations; as well as her own Universe in which she dwells. Her work depicts portraits of colourful characters with queer and feminist themes, defying sexual and gender stereotypes. She explores the objectification of women, and the feminine identity; interwoven with prominent themes of obsession and addiction. She infuses these topics with humour and a child-like exuberance with simplification and distortion of forms, and a brazen use of colour.

She graduated from the Rhode Island School of Design (RISD) in 2005, and has worked for designers threeASFOUR and Zandra Rhodes, and created costumes for musicians such as Gabby LaLa, Les Claypool’s Fancy Band, Bishi, Saidah Baba Talibah, Ina unt Ina, Alesha Dixon, and notorious Toronto performance artist Lena Love. She has also worked on many feature films, and musicals such as Priscilla Queen Of The Desert and CATS. In 2014, she passionately redirected her focus from fashion and costume design to visual arts. She has shown her work internationally, and appeared on BBC One, i-D Magazine, The Guardian and FASHION magazine – to name a few. She currently “lives her art” in her magical maximalist studio home in East London.