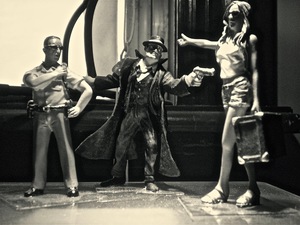 Michael Bereznoff is an artist who spent many years in Baltimore, Maryland. While there, he painted streetscapes of that city, known for it's dark side as depicted in "The Wire" and "Homicide: Life on the Street", using brilliant saturated color. These sunny, glowing images of familiar neighborhoods were almost always devoid of human habitation and were painted in an immediate slapdash way with full brush; sometimes leaving drips or spatter.
Now Michael has moved to sunny Florida and his artwork has taken a turn for the dark side. He has made an almost complete about face in terms of subject matter and technique. His new series of scratchboard drawings are meticulously rendered in contrasting black and white, and illustrate mysterious narratives often involving law enforcement officers or uniformed men. These narratives almost always take place at night and so have the atmospheric bent of classic film noir. Bereznoff employs the night sky and streetlamps to illuminate curious goings on that sometimes convey a surreal or mythical element. The cinematic component continues in Bereznoff's choice of a 1950's theme to chronicle the events taking place. 1950's automobiles, police uniforms, gas stations and wanton women all figure into pithy vignettes that keep the viewer asking questions. The overall title of this series is Hale's Corners: Visions From the Black Hole. Bereznoff was actually born in the village of Hale's Corner's, Wisconsin in the heart of the Midwest in the 1950's. Does this series recount the memories impressed on his fledgling soul from those childhood days?Michael Bereznoff says he is "creating an environment, on an immobile two dimensional surface. This is the destination of my visual journey. By focusing on the principles and elements of design I am able to systematically build a visual experience that creates the appearance of three dimensions."

Michael remembers that his 7th grade art teacher strongly affected his desire to become an artist.

Michael attended five colleges, including spending two years at Maryland Institute, College of Art. He later moved on to receive a BS in Art Education from Towson University, Towson, Maryland.

The influence of Baltimore and the surrounding area on his art is evident in these examples of his work. Michael conveys not only the images of the City of Baltimore but somehow he captures and relates the feel and experience of Baltimore through his paintings.

In response to what makes him unique as an artist, Michael says, "The only real way that an artist truly creates something 'different' is to find, establish and constantly pursue that voice that is unique in each and every one of us. What makes any artist's work stand independently from any other entity is based on the strength and self-awareness of an artist's personality. Therefore, my work is only distinct from other artists' output due to my 'one of a kind' sensibility."

His work is based on his own photos that he composes and shoots himself.

Visions From The Black hole