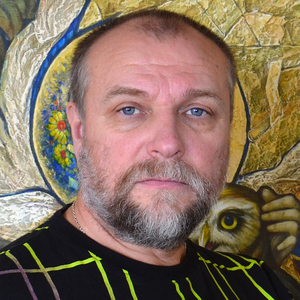 Blessing of the Harvest

On that Festive day we bring to the temple apples, pears, grapes, vegetables and for a moment the temple itself turns into a mysterious garden. In that blissful paradise where human life began, and where his meeting with the Creator took place. And as the first man opened his eyes and saw the world where, as the Creator said, everything was "very good" and was glad, and gave thanks. So we, like the first time we see the world as a reflection of the great wisdom and love, and rejoice, and give thanks. And in this joy and thanksgiving our life is getting clean, updated and revived.

“Yury Salko. The consecration of the fruit. 80x80. acrylic on canvas. ”

Yury Salko. «The Night Prayers’ Wings»
Dream is real, the reality is absurd, because it is surreal, and art is a wonderful fusion of the real and the imaginary in their interpenetration. The artist strives in his work to embrace the eternal mysteries of mankind through the universal symbols, through the materialization of the artistic sensibility, through reading texts penetrating "eternal books" and prayer. According to the observations of the largest representative of the romantic painting of the German 18th century Caspar David Friedrich: “Every real creature of has its conception at holy hours, has its birth at happy hours, mostly without perception for an artist, out of an irrepressible impulse of heart...” The author does not mean, but hints, he puts the dots instead of the points and absolutely not accidentally, but consciously provokes us to participate in the process of co-creation, encourages the production of more and more associations which are not limited by stereotypes and conventions. The artist wants to avoid the traditional understanding of symbols and move the emphasis from preliminary task on ambiguity, diversity, giving the viewers the freedom of their own interpretations of what they have seen.

When the daily bustle ceases and people's voices are replaced by the rustle of midnight birds and everything is filled with some quiet unearthly radiance, one begins to feel himself differently. As the German philosopher Arthur Schopenhauer remarked: “In solitude one sees in himself what he really is”. And by removing the mask of the day, one is going through some experience of "mystical insights of reality as it is." When perpetual censor - the mind is powerless, it is time to soul. The night is a mystery when Disembodied Heavenly Forces open the gates of the universe and the soul acquires wings. The Night Prayer is the strongest one — open the doors of repentance to me, Giver of Life! The Night Prayer is the Sacrifice. The Lord always comes to Sacrifice. And if your heart is open while you are praying and your thoughts don’t wander, you’ll feel His touch and anointing, you’ll feel His love and unity with Him. It is a real Happiness to be with Him and to be filled with His presence! The Lord answers through this sacrifice. His Word comes alive in me. The Lord destroys evil demands of all people condemning me, stopped the mouths and hearts of all slandering, spiteful and roaring at me, and all the blaspheming and degrading me. He gives me peace of mind to find anything that the new day is bringing. He guides my will and teaches me to pray, to believe, to hope, to suffer, to forgive and to love. I entrust my soul to His hand before going to bed and upon waking, and together with the soul I entrust Him my body. The Lord is with me, and I will not fear. And the spirit and the soul are filled with joy and jubilation. And it seems that the wings grow behind my back, my body is full of energy and is renewed in force. Like in the promise of the prophet Isaiah: "They’ll stretch their wings as eagles; they’ll run and won’t be weary, they’ll go and won’t grow weary ..."

Yury Salko. «The Lemon Tree»
According to the opinion of the founder of analytical psychology Carl Jung, the function performed by the artist in society can be compared with the function that dream performs in the life of an individual. The artist is the medium and the spokesman of the "collective unconscious." He is, as it were, in the middle of the most ancient mythological notions of the current life, throwing bridges between them. The world is dual. This means that people are dual in their states. Passing coexists with eternal, creativity with war, anger with Love, sublime is combined with a mundane, spiritual means bodily. Faces on canvas are symbolic and significant, they are at the turn of time and eternity. They contain the reflection of spirituality and tenderness, aggression and evil, there is the expectation of goodness and light in them. People are always lofty and low-lying, rough and reverent, holy and vile. The body is a projection of the tree where the feet are the roots, the hands are the branches, the body is the trunk of the tree, and the head, this is the fruit of our tree. What are the roots, so is the fruit. The head, as a symbol of thought and our consciousness, is the fruit which we must cultivate in this life, awakening our independent creative thought. And let it be a Lemon tree with flowers and sunny fruits as the symbol of light. Without the sun the world would be nothing. The Sun is the symbol of the Lord. "Through Him we live and move and remain in existence," - stated the apostle Paul. In many spiritual traditions the Lemon is the symbol of earthly love, wealth and prosperity, as well as the inner harmony of man with himself and eternity. The artist enters the heavenly and the eternal with the help of the inner vision. The inner vision rises the person above deception feelings, by virtue of which he is enslaved in this life, earthly and temporal. He comes to the difference between being and appearance and understands the material as a means of spiritual manifestations. Thus, he sees eternal in transitory. This speculative mysticism is the common heritage of mankind. It appears wherever the human mind in a higher voltage tends to understand the relationship of the individual to the universe. We find it in Platonism, Stoicism, Christianity, Spinoza, Schopenhauer and Hegel, the Brahmans and Buddha, which reflects the image of the hand lemon, being one of the "blessed fruit of Three" along with peach and pomegranate. And let the aroma of lemon flowers amuse the mind, peel and grain heal the heart, the flesh of the fruit please the body, juice quench thirst and sunny lemon color give peace of mind and good mood.