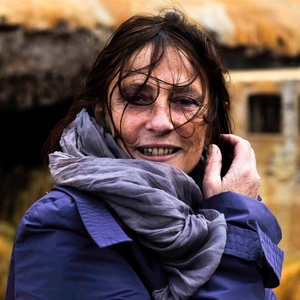 Lapides
"Lapis, lapidis. Stone, earth, nature, woman. Beauty and power suggesting the strong resistance against those who try to suppress the thought. The stones, thrown out of fear of beauty, are the same as transmitting the energy to fight. The stones sparkle, flying ghosts, light and soul live in freedom.." (pd)
Lapides began as work on women: a dress that evokes the beauty and feminine, but without a body, it is a right denied and stones, nature, make it alive the desire for freedom. Lapides is the answer: the stones that do not want to be thrown, which does not want to kill the beauty that sometimes scares, and that triggers uncontrollable anger. And as it relates to stone, nature, and therefore to the motherland, Lapides is the answer to all the human and social rights.
"Look, talk, walk with me" ...
I was looking for a virtual place, which would allow people to embrace common thoughts, those for whom history has sown heroes, for small and large human rights.
Thus was born, on the occasion of the event of 13 February 2011 (If not now when?) www.camminaconme.com, a blog supported by associations, photographers and ordinary people. It is related to performance on human rights and social events. A hundred postcards are printed with a picture of Lapides to which is added the graphics of the event, and are distributed during the event: "I'll give you a postcard, I take your picture, I'll put you on the blog". Following the pictures to people with the card are "posted" on the blog, an effective way of communication, which until now has about 8,000 visits.
But Lapides also needs physical places, from those in which women are massacred: printed and displayed on granite, or placed in public places, where those rights are violated, as a plaque on which we can ideally place the memory and pain, and also the claim that beauty exists and it is the richness of our lives.
Lapides is earth, nature is the stone which shines on our path towards a better world.