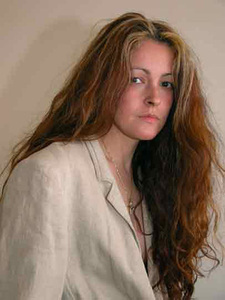 Maria Serra, known as Selvaggia, was born in Turin Italy but later moved to Lecce where she obtained her high school diploma in Arts. In 1986 she moved to Rome to continue her studies at the Institute of Photography, where she specialized in photo reporting and set photography. She continued to work in this sector for the following 11 years. While doing this she also became involved in the selection process of photos of various Roman photographers for the Sicof exhibition in Milan. She was also entrusted with some advertising campaigns such as The Bank of Rome campaign and the Bologna exhibition The Horse in the World of Advertising, conceived by Luciano Pavarotti. In the year 2000 she took another specialization in graphics and photo editing at the ENGIM school in Rome, obtaining the qualification of multimedia technician.
In 2010 her multimedia work took off, almost by chance, while she was searching on the web for artists to contact to propose a 3D graphics and Video Art gallery for the exposition of their works. It was then that Selvaggia decided to open her own webpage, with a section on Digital Art, and went on to publish graphic works that she happened to have on her computer. Immediate appreciation was shown by other artists who soon began working with her. Today, this experience with digital art has come full circle bringing her back to her original artistic expression: painting.
She has taken part in various collective exhibitions and has been awarded prizes in various juried competitions throughout Italy. She was involved in the project Warning Planet for the Pedagogical Museum in Uruguay where her painting The child and the scarecrow is now permanently exhibited. In 2012 Selvaggia held her first solo exposition in the Hesperia Gallery in Pomezia, near Rome, on the theme Year 2012: from the Maja to Nostradamus... to the present day. Selvaggia uses this theme as a pretext to consider the countless catastrophic and apocalyptic hypotheses in popular and religious cultures that crowd the most diverse media. Selvaggia translates and reworks the “prophecies” through the use of symbols and technological colours. The event was sponsored by the Departments of Culture and Environment of the city of Pomezia because of its strong cultural value and the clear reference to environmental issues. Following Pomezia the exhibition became itinerant.
The Artist was invited by the “Three Guineas” Association to exhibit in the Fiorillo Arte Riviera of Chiaja in Naples and after at the MAMEC Museum of Cerreto Laziale. From 2012 to 2014 Selvaggia was engaged in exhibiting works, in various Galleries and Museums, on the theme of environmental protection and other social issues.
Selvaggia says: “Today for me Art is not only technique but is a means of communication, a tool for protest and provocation to get people to reflect on this specific period of our existence. In this way I feel that I am a story teller of my time”.

2012
· Solo Exhibition Year 2012: From the Maya to Nostradamus... to the present day. A synthesis of graphic images and photo processing, Hesperia Gallery, Pomezia, RM.

“Cosmic Thought in Colour” of the Wilderness

Technology and science that always get more sophisticated let you explore beyond the boundaries of the universe, different senses that send images from other planets will express the sense of mystery and profound beauty in this interesting exhibition, the fascinating astral journey and creativity of an artist like in the Wilderness, help you gain a particular ability to turn it into a language that is suited to the complexity of the universe, in inspiration and dreams.
Having investigated the mysterious planets of the universe, after landing on the moon, we are increasingly convinced that there are other spaces, other worlds that in another time, yet to come, humans will travel to, considering the drama of Planet Earth in which if he wants to survive, man must commit to regaining balance with nature, the essential values for living together, inner harmony with itself especially now that the cyborg will replace it and is more and more controlled, catalogued, manoeuvred.
In cosmic thought of the wild there is an enclosed purpose: The inclusion of extraordinary monumental works is the true message of salvation from environmental catastrophes due to neglect or terrorist acts, the result of violence being more and more present. These are pages of a diary in which futuristic plastic tension is concentrated in an effective formal synthesis, not only the product but also by the imagination of extensive research. With the recovery of the matrix image of signs exceeds all academicism and with a chromatic varied, staff ranging from so many variations of the green to red, to pink, to purple, to blue, to black ice presence - recalling immortal works created by genius of man on the planet earth, transferred to Mars, on Saturn, on Neptune, like the Coliseum, the David, the Nile, some of the many jewels of the earth, become infinite creatures from other planets. The wild also takes into account the genetic mutations as the woman reptile, octopus, female mineral, Eros and the warrior who dreams a beauty that will save the world. Through probes sent into space, we discovered that the earth has a twin Keppler 22 b, that mercury is turbulent, that Venus that always makes us fantasize has an unsustainability and its yellow clouds are terrifying, that Mars the red planet, neither too cold nor too hot, has windstorms, that you cannot resist the sun, even if our lives are linked and will end with it. Always the endless cosmos is so inspired, disturbed, that the ability to look to the heart of the matter by opening new challenges to the mystery of those worlds is longitudinal. Evocative colour creates this story that takes place through a time scale immeasurable also giving the opportunity to expand our horizons of alien intelligence. Even with the premises of a future in continuous evolution that glimpse new frontiers, today's technology still cannot answer so many questions and so I entrust to the verses of Antonio De Marco.

“ Bradyseism on the planet Venus”