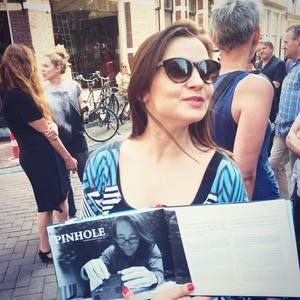 Maria became a freelance photographer in 2011 and has been busy photographing editorials for clients such as Llamas Valley, Time-Out, 1st Dibs, Uitkrant & A-Mag magazine.

Maria is also familiar with modelling and acting which helped to develop a keen sense of human nature and personalities that clearly reflect in her favourite work – portrait & product photography.

Living her dream now, feeling blessed to be able to keep the balance between inspiring personal projects and developing her own portrait & product photography studio.

I am Lithuanian and Lithuania is the last Pagan country in Europe. In Pagan tradition, people with two different color eyes are called "Children of
Hags”.
Heterochromia condition (is a difference in coloration, usually of the iris in the eye) is very rare, only 6 people out of the million have complete
heterochromia. I started photographing this project about a two years ago and so far I am in contact with 300 people all over the world of which over
90 of them contacted me themselves asking to participate. This has come to show me that it is a project that means as much to them as it does to
me.
There is much mythology surrounding Heterochromia and very little fact. It is obviously a condition that captured people’s imaginations and even
fears.
Although much of my research on the subject often delivers both inconclusive and vague results, I have continued documenting heterochromia
around the globe and collecting stories.
Heterochromia stories are really inspiring and educating, it reminds us of the fact of embracing our differences.
My final goal is to make an album called "Heterochromiacs" whereby I document all the portraits from the project and present quotes from the stories
to go along with it:
“APART FROM THE STARES I REALLY DON’T MIND HAVING HETEROCHROMIA, I LOVE MY EYES“
“I AM AN ATHEIST, THE CROSS IS THE PRESENT FROM MY GRANDMA, BUT I DON’T BELIEVE IN GOD”
“IN THE ARMY WHENEVER WE HAD TO PUT CAMO ON OUR FACES I ALWAYS LOOKED THE COOLEST”
“I FELT LIKE A PART OF SOMETHING MORE…..PART OF PEOPLE WITH SPECIAL EYES”
“I DID NOT HAVE ENOUGH ROOM TO FILL IN MY EYE COLOUR, AS IT ONLY ALLOWED FOR ONE. SOME OTHER STUDENTS FOUND THIS
FUNNY AND ONE, IN PARTICULAR, TEASED ME FOR A TIME ABOUT IT. IT NEVER BOTHERED ME, THOUGH. I CHERISHED BEING UNIQUE AND
AS I WAS BORN”
“DO YOU SEE SAME THROUGH BOTH EYES?”
This would be the first official photographic publication of Heterochromia.