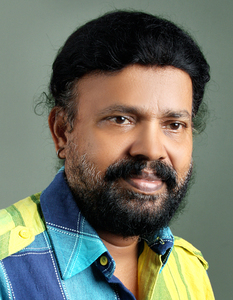 AN ARTIST
Self taught Artist.
Travelled extensively all over India from the child hood. Lived with untouchables and labourers in various parts. Studied the life styles of marginalized people. Conducted more than twenty solo shows of paintings all over India. Participated many group shows also since 1977. Works showcased in many galleries all over the world and through online art galleries too.
Aranyakam, an art dealing group cochin ,in association with hotel Taj Malabar cochin conducted an auction of my ten paintings on February 5th and 6th 2007. More than 200 paintings collected by the art dealers and collectors all over the world.

An ARCHITECT
Designed and constructed one hundred and twenty residential bungalows and some commercial buildings in the many places of Kerala like Ernakulam, Thrissur, Palakkad, Malappuram and Kozhikode.

A CARTOONIST
Published numerous cartoons in various Malayalam periodicals like Mathrubhumi weekly, Thejus and other newspapers too.

Gayatri’s works can be broadly classified under three heads,” Childhood memories, Village and Diary”.The last mentioned are reflections on the contemporary world with its frailties and foibles. Recurring in most of the exhibits are arched trunks of coconut palms, the giraffe and ladders. The artist explains it thus: “The arched trunk of the palm I have taken from the mythical belief that in the times when man lived close to Nature, the tree was not beyond his reach. It distanced itself from the world of humans when a woman used it as a clothesline. - Bhawani Cheerath, The Hindu ,31 January 1997

Having had this inborn talent and having started to experiment at the age of three, what then are his main inspirations? “Little day to day happenings in human life and the deep environmental relation of all species in nature”, Gayatri says searching for the best words to portray his innermost thoughts. “ I paint my feelings, my comments and opinions on life, wishes which have remained unfulfilled to date”. On his “ special contribution to art”, he muses a while, then replies slowly, “ Basically, I have adhered strictly to figurative forms and you could say my experiments with such forms is a kind of contribution”. As an afterthought, he adds, “But I’m a young man and still have a long way to go.” - Suba Vasudevan, The Sunday Observer, 14-20 April, 1996

For instance, in Gayatri’s paintings, the images taken the village scenes of Kerala and the children’s books which tell stories of animals. The innocence consciously created on the pictorial plane, however, supports the notion of purity of modernism. Thinking of anything from a distant cultural platform can only suggest the gap of communication rather than the oneness with it. - M. Ramachandran, The Statesman,Delhi, 16 June,1997

The paintings reveal the mind of the artist who is troubled by the inequalities in life, troubled by the exploitation and of the loss of innocence due to globalization. But he’s doing what an artiste does best. Speaking loudly through his works. Only Gayatri’s tone is cleverly camouflaged in colours, colours that will win a viewer over as birds fly, fish swim and cock crows in the villages, the lines, figures, images all carry a strong critique on present day politics and social life. - Priyadarshini Sharma.The Hindu,january 1,2007

Untouchablility and gender inequality, the grey clouds that once hung heavy over society like the many woes of the world do not go untouched as the artist draws a vivid picture of the bitter realities of the world we once lived in. The startling comparison between a band of gypsies and the crows sets an interesting base for him to build on the story of disdain of the outcast, painted subjectively from a birds eye view.- Ponnu Elizabath Mathew, The New Indian Express, December 27, 2006

The Diary paintings are a mix of Gayatri’s personal thoughts on the human condition, and portraits of contemporary reality. The recurrent theme in these works is the struggle for power. “We like to think that we are Gods of our small worlds. We become despots and try to suppress and control others, “he says. One of the paintings in this collection shows a crowd of people without faces. “It is a bird’s eye view of people in cities , who are constantly on the move. But an individual in this sea of people has no image, no character and no face. Its an identity crisis which everyone faces in a crowd,” says Gayatri. The dominant in the artist’s work is green. – Deepa Deosthalee, Express Newline Bombay, 8 May1997.
Gayatri’s works smack of ground realities rendered in a unique style. A style free of any ‘isms’ as he is a self taught artist. Each frame holds ethnic images set against a rustic background or the over exploited urban setting and revolves around the downtrodden. The people who very few painters have highlighted on the toddy tapper is blown up to show his painful plight as he climbs to the coconut palm. Like wise , another tapper is midway while images of his wife waiting for in despair and another fellow being waiting below depict strong human bonds. - R K Surekha, City express, May 11, 2006

Painting found it way in India by the vacuum created in the cultural conflicts between the east and the west. Primarily, it embedded with themes relevant at that time; and it developed with the other forms of art and with architecture. Portraiture paintings gained much reputation at that time as the patronage of painters were considered a mark of aristocracy. The name of Raja Ravi varma comes at this juncture. His mythological paintings and portraiture gained him laurels. - Sunil K Poolani , Weekend Newstime, May 30,1993.

he is an Indian artist. for more details please have a look at his biodata