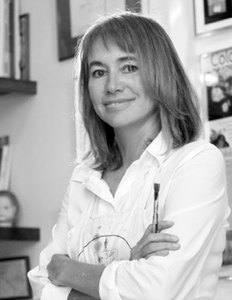 She began her formal education at the Villa María Academy and, when she was in high school, at age 15, started her artistic upbringing taking up drawing classes first with Carmen Silva and later with Valentina Cruz. Later on at Santiago’s Pontifical Catholic University she obtained a master’s degree in art. While pursuing her career at the university she spent two years doing assistantships in drawing, specializing in engraving. During those years she was awarded second prize at the student’s art exhibition in said university. Some of her teachers were Eduardo Vilches, Mario Carreño, and Gonzalo Cienfuegos. She did illustration work for Paula magazine. Participated in the refurbishing and remodel process of the Roberto del Río Hospital, and also organized the Color and Silence project, painting murals with renowned Chilean artists in the building of School D21 for the Hearing Impaired, which belongs to and is managed by the borough of Santiago.

She has taken part in numerous collective an individual exhibitions, in Chile as well as abroad. Among the latter we can mention ‘Quinto Salón de la Mujer’, in Buenos Aires, Argentina, ‘El Bastión del Carmen’, in Uruguay, ‘Doce Pintoras Chilenas’, in Casa Santo Domingo, Guatemala City, and ‘Masters of the Imagination’, in New York, N.Y.

During the year 2008, she has taken part with her students,in the remodel process of the church, Parroquia Nuestra Señora de la Peregrina, in Huechuraba , painting a mural called, The Visitation. (2 mts by 7 mts.)

During the years 2009 and 2010, she painted also with her students, the missing paintings of the church La Anunciación.(close to Pedro de Valdivia square) , and painted with Ovalle´s children, Ovalle paints the bicentenary with his children. (mural of 3mts by 7mts)

Actually she is dedicated to her painting, doing some sculpture work and teaching painting in her studio.