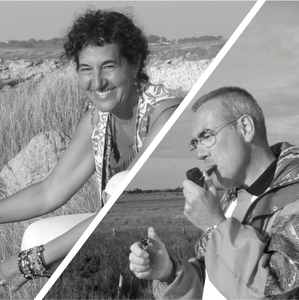 United as a couple not just in life but also in work, after meeting in 1990 they set up their own studio of graphic design and communication in 1993.

Since 2005 their specialized and in-depth knowledge of graphic programs, drawing and photography has led them to experiment and elaborate their own artistic compositions, paying particular attention to tones, movement and light.

Using the techniques and technologies which they have perfected across the years to paint means they can communicate and express emotions in a new way.
They have both discovered a new passion, a passion which as always they live together.