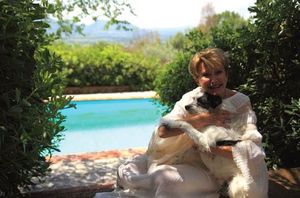 Carla Castaldo was born in Maddaloni (CE), and has always lived Napoli.
She took her university degree in Architecture, and then she mainly worked within the testing and restoration of monuments, and dedicated her work mainly to religious buildings.
Fascinated by the love message from Reiki, a spiritual and therapeutic practice with its origins in the ancient Buddhist sutras, dating from the fifth century. B. C., she attended the first level training course in 2011 and the second level one in 2012. This helped her with further honing her sensitivity, which led her to see existential events in a different light and one of wide-ranging spiritual approach.
To express the feelings that are contained in her soul she dedicated herself to hand-shaping clay, but it is in the world of painting that she feels she can best express her emotions. She has been following an exciting and rapid search path, where she experiments with materials and different techniques used in her own special ways, according to the feelings she wants to communicate.
Pictorial representations on ceramic plates arouse great emotional involvement in her, because it is here that she manages to express her emotional universe. She uses the ancient technique of "third fire decoration" with a very personal interpretation, and entrusting the completion of her work to the magic of fire, to convey mysterious and surreal messages. As a matter of fact, it is during firing that the integrity of the artifacts is at risks, while colors take on their intensity and final hues.

She exhibited her works for the first time in a group exhibition in Naples in 2013. Since 2014 she has been selected for and invited to participate in important international exhibitions in Italy and abroad, amongst which the 56 Biennale di Venezia (2015).
She received three plates and very flattering criticism.
Since November 2014 she has been registered in the database of Artprice, the world leader in art market.
The following art critics and historians wrote of her: Gregorio Rossi, storico e critico d’arte; Guido Folco, storico e critico d’arte, direttore della rivista ITALIA ARTE; Azzurra Immediato, storica e critica d’arte; Maurizio Vitiello, storico e critico d’arte.
She is mentioned in some art publications, among which: Percorsi d’arte in Italia 2015, edited by Enzo Le Pera, Rubbettino Editore (2015); Agenda 2016. Luoghi della bellezza, edited by Giovanni Zavarella, Luoghi Interiori (2015).
She is mentioned in the magazine Italia Arte, director Guido Folco, in the following issues: anno 11, n. 5 (109), maggio 2015; anno 11, n. 7 (111), settembre 2015; anno 11, n. 8 (112), ottobre 2015; anno 12 n. 2 (115) febbraio2016.

For her works see also: http://www.artupclose.com/carla-castaldo