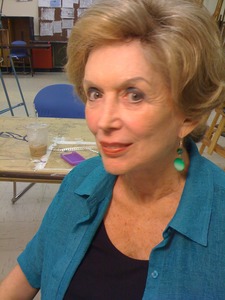 
It’s exciting for me to make art when there are challenges that I have grave doubts about achieving.
So, I found one that in spite of all the work I have done, is perhaps what I had been avoiding my whole life. That is painting from live people within a period of time short of torture, 20 to 30 minutes.
Drawing is one thing, but painting people in watercolor, that delightfully uncontrollable medium, definitely adds to the challenge. In addition I had to become more of a master of feet and hands to do them in that time frame. The process requires an amazing amount of concentration.
While in the zone, I am aiming for a drawing that captures the essence of the person’s gesture and attitude. Also I aim to capture the illusion of volume and make use of color to describe and exaggerate the third dimension. I also love the play between positive and negative space, making negative seen as positive and vice versa. And lastly when I can get the illusion of volume and also get it to dissolve into the negative space, I can thrill myself.

Linda Dirty Martina is a well-known contemporary Burlesque Performer who I get to paint between her bookings.
She appears to be an impressively large personality, but is in fact rather diminutive in size.

I've painted Niki since her arrival from Germany and before her two children were delivered. Beautiful slender or large, she is majestic.

Ryan arrived from Nebraska to make it in the NYC Dance world.
He is both a pleasure to paint and a challenge as he insists on taking impossible positions to challenge visual artists.

In this instance though I love to paint dancers, it was this sheet of old and alas discontinued Cotman paper that was the biggest inspiration.
Gee I wish they would continue to make it.

Amber is both a Burlesque performer and a costume designer and creator for her peers.
Her volume and distinctive proportions make her a very popular subject to draw and paint.

Rainbow is an actress, model, and health care worker.
It's the fact that Rainbow is almost entirely in shadow but still conveys volume.

This detail is to show the action between wet and dry washes.

Anastasia keeps herself in great and healthful shape.Whenever she is ready to pose, so am I to paint.

Trying to capture them in movement is an additional challenge,
But they are fun and energetic!