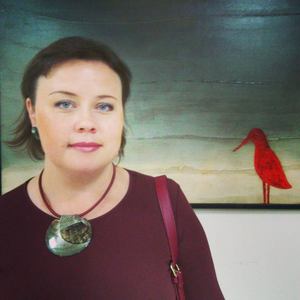 Lense based artist, a member of the Russian Union of Art Photographers since 2012. A graduate of the educational program "FotoDepartament. Institution". A participant of numerous group exhibitions of contemporary art and documentary photography in the cities of Russia, Europe and Asia. The winner of the Gold Medal of the 15th International Festival in China. The solo exhibition was held at the Contemporary Art Gallery in Yekaterinburg in 2013. The author of "Look wider" photobook devoted to the life of blind people which is in the collections of Russian science and culture centers in Paris, Brussels, Berlin, Gdansk, Helsinki, Vienna, Antalya.

The Artist Statement
Curiosity gives me no rest. The scope of the visual research interests is not limited to one theme or technique. Initially photography was a certain kind of psychotherapy for me. After completion of each project, something important was changing in me: my attitude to success, religion, disabled people, ethnic identity, my attitude towards my parents. This was a period of continuous personal transformation.
The main element that fascinates me in photography in the process of search is time: the time of exposure, the curvature of the past-present-future sequence, projection of the moments onto the paper, materialization of light fluxes which creates the illusion of you having grasped the moment of life. To find oneself in the past is physically impossible, but photographing for me has become a kind of the “wormhole” that allows me to find the shortest path through space and experience something that was impossible earlier in my time. Work on the series "City of childhood" has given me the opportunity to overcome the unresolved internal conflict, after that I eventually allowed myself to get acquainted with my birth father.
The paradox of the "time" concept consists in the fact that we feel it intuitively, as far as using it to fix the chronological changes and synchronize our internal rhythm with the outer one. But its existence is not fully knowable, perhaps because the world of physicists and mathematicians is based on formulas and immutable laws, and where there is no change, there is no time. This raises more questions for me, than gives answers.

Images stimulate desire. Behind the outer surface of the urban space visual images there is a layer of meaning that is symbols and signs. Visual reality should be seen as a cultural construct which is to be “read” and interpreted in the same way as a literary text; as a cultural "text" which reflects the history of the country, everything which was accumulated over the centuries in the same general appearance of the urban environment and contains "folk relics" themselves.
The Soviet city space was always too rough, straight and colorless. Changes of the “Wild and Evil’ 90s” added colors, advertisement appeared in the streets, on the one hand that solved the utilitarian tasks of business self-presentation, either big or small, but on the other hand dominated as a decorative element of the urban environment.
Intuitively, passing through oneself the information mess one wants to get rid of it, first of all. Unfortunately it is impossible. I tried to transform the visual trash which I face almost every day into the abstract images popping up in my head from time to time when I see that “trash” again.

I take the ordinary, unremarkable pictures, literally everything that I see on a walk, then print them on transparency film, and experiment with different ways of blending, pictures showthrough and motion during a camera time exposure. I am fascinated by unpredictability of the result; it is very similar to the fortune-telling on Christmas Eve or creating abstractions on canvas while painting with closed eyes. Getting the picture which makes one to fancy more of the images and provoke the freak of the imagination takes a lot of time. This confirms the fact that a lot of things in this world happens not by chance; now I have no doubts about that.
Stylistically, the works can be divided into two cycles: the first one is the vitrage, the image created with photos displaying outdoor advertising which is shot close-up; the second one is a watercolor image created using photos of street space filled with billboards and banners.
Printing of the works for exhibition or sale implies creation of different sizes - from the smallest 10 *15, to the largest 1m*2m, to create the effect of the varying degree of immersion into or abstraction from the image.

Single works about the invention of everyday life. Fictional and reallife.

The society of success

The planet does not need a large number of "successful people". The planet desperately needs peacemakers, healers, restorers, storytellers, and loving ones of all kinds. It needs people which are good to live with. And this has little to do with "success", as defined in our society ...
The Dalai Lama.
The transcendence of God declined. But He did not die, he plunged into the human destiny. This man - a Superman who first begins to consciously fulfill the covenant of the capitalist religion. Capitalism is a religion of pure worship, without dogma, the essence of which consists in liberation from worries, anguish, anxiety which were weighed upon by the so-called religions before.
Increasingly, a person puts himself on a pedestal with his growing ego, raising himself to the rank of celestial, thus mythologizing his own life and shape, in which it is difficult to separate the truth from the fiction.
In modern times success and its achievement become a strategic objective of the individual's way of life, thus motivating activities and determining behavior. Success becomes the dominant in the light of which a person estimates the entire surrounding world and its phenomena. A huge number of people exposed to the charms of ideologeme "Be successful!", implying recognition, popularity, wealth, etc., forget about morality. Selfish purposes connected with getting benefits and receiving personal recognition are brought to the forefront. Own dreams and aspirations are replaced by the desire to meet the criteria of those who are successful, getting only its attributes, not success itself. As a result, the success of nowadays turns into a meaningless shape showing not strive for certain objectives, but semblance or simulacrum.