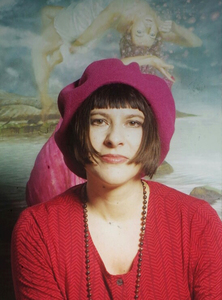 JOLANDA RICHTER
was born in 1971 in Netherlands. Aged three the family moved to Hamburg, at age six to Vienna. She quickly took up art and music. She was admitted into the 'University of Music and Performing Arts Vienna', where she studied the cello for five years. Since childhood Richter also displayed impeccable rendering skills, but as she grew older music and performance consumed her time. Longing to paint again, she enrolled at the University of Applied Art in Vienna in 1994, master-class for painting and graphics. She graduated in 1999. Since 1993 numerous exhibition activities in groups and individual leaded Jolanda Richter through Europe and USA. By now Jolanda Richter lives and works as freelance-artist near Vienna.

“And the heavenly body's quiet center”

“Beyond the plains of eternity”