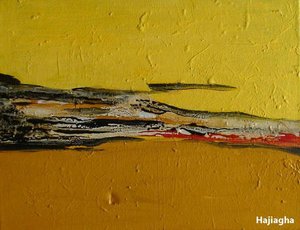 Hajiagha born in Iran 1966 ,shahroud .He like drawing and painting from his childhoods. Include several awarded in school for his art. 1984 He join army and war wounded by gas. Iran and Iraq war.
Hjaigha was study painting and drawing in Tehran, shahed university , calligraphy at Iranian calligraphy society , was working full times job as artist for government of Iran and cartoonist for Gol Agha magazine ,
He left Iran in 1994 with support from US embassy in Istanbul in Los Angeles .He published editorials and politicals cartoons over Iran and had several talk show magazine or news paper interview in past Canada or USA, His art works also complain and speaks over Canada human right and racism in Canada over multicultural.
Was study computer 3D Maya in Toronto and 2D animations drawing by hand in Los Angeles .Photographer and his photography publishing in C.B.C National geography Magazine , discover channel. Globe and Mail. Photography Talk.