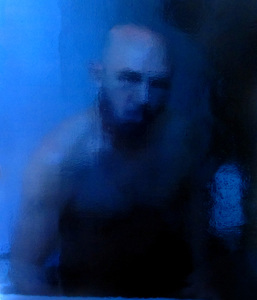 Jose Gomez is a mixed-media artist, originally from Seville and based in London. Since completing his degree in Sculpture at Camberwell College of Arts (UAL) in 2012, he has developed another side of his artistic creativity, the making and mixing of abstract and figurative paintings and sculptures.
His work has been featured in several London group exhibitions – incl., Flesh exhibition at the Espacio Gallery, “Tribe 16” at the Ugly Duck and ““Beyond Margins” as part of the Gfest festival at the Menier Gallery. Jose presented his first solo show, “Colores dame colores”, at the Salome Gallery in 2004. He is currently working on a new series of paintings, minimal glow foil blocking with bright surfaces quality and reflecting position. He presented his third solo exhibition in London in January 2017 at the Trip Space.


As an artist I am basically fascinated in creating works that call for the participation of the audience to the same level as my attachment in it. Self reflections create a charming and mysterious quality in the art of self-portraiture. These new series of minimal paintings, produced using a metallic material (foil blocking) on wooden boards, engage in amusement with the reflections of the viewers; creating self-portraiture images, which is a psychological evidence of the reflected image, not always an objective picture of the viewer and his personality.These works have a spiritual nature and sensuality which discern the human reaction to the glossy and colourful finish of art work. The liquid feature gives the viewer a huge visual impact within the surroundings it occupies; embodying the materiality, light and reflection of the infinite space.
With this series of minimal paintings, my aim is to explore and to give pleasure to our visual organism, based on the interpretation of our appearance and our natural ability for observation that make possible an emotional response.