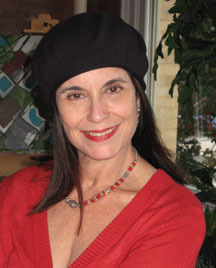 Born in Philadelphia, I received a B.F.A. in Painting from the Philadelphia College of Art and studied at the School of Visual Arts. A Manhattan-based artist and graphic designer, my work is featured in private and corporate collections and has been in many exhibitions. Most recently at the Pen and Brush Gallery in NYC,  Dacia Gallery in NYC, Kaller Fine Arts in Washington, DC and Riverside Gallery, NJ. Last summer the Chelsea Art Museum in NYC. I'm an active member and exhibitor at the National Arts Club. Additional information and visuals can be seen on my website www.tonisart.com.

Realistic in my perception and approach, I paint aerial views that represent the diverse places and spaces of our contemporary landscape with a focus on compositional aesthetics and color to communicate perspective. One discovers in the aerial vantage point, a modern perspective and fresh visual vocabulary. The flattened surface plane reveals tenuous textures of abstract space, providing pictorial milieu and verve. It offers a viewpoint of reduced depth and a different perspective, creating less predictable detail and more abstract shapes while retaining the essence of the area. Drawing from the elevated position of high-rise buildings and commercial jets, I produce images of cities and towns, factories and farmlands, power plants, suburbs, and highways.

Oil on canvas, 36" x 48" x 1.5
Seen from above this government building in Germany become an abstract design and the key element of the painting. Reduced to the circular elements, the details are softened and somber by the use of gray. What I tried to achieve is to extract the graphic essence and use my color sensibility to pull the composition together.

oil on canvas, 36"W x 36"H
A bird's eye aerial view of a suburban development on a culs-de-sac .The flattening of the picture plane reduces the details to a strong circular graphic. The shadows hint at a time of day and add some perspective.The juxtaposing of this color palette combined with graphic but soft-edged shapes convey a feeling of time, place and individuality.

oil on canvas,60"H x36"W x 1.5"
An aerial view of an industrial plant. The painting combines elements of abstraction and representation, pattern and grid, surface and illusion, as well as observation, imagination, and memory. Hovering above it examines the relationships between the man-made and the natural.

Acrylic on canvas, 36"H x 48"W
This is an aerial view of the blue city in Judhpur, India, which is unique because of the color and architectural style. Working through the lens of the camera my painting captures the moment, and lets the image tell the story about a this place and who might live in this part of the work without showing any people.

“Airport and Train Station in Lyons”

Oil on canvas, 36"W x 48"H-
A bird's eye view of the Airport and Train Station in Lyons, France which is recognizable but has elements of abstraction. The flattening of the picture plane reduces the details to a strong graphic image, representation, pattern and grid.

Acrylic on canvas, 36" x 36"
Seen from above this industrial area in Bavaria becomes an abstract design by dissecting the image into nine parts. The squares are a key element of the painting's composition. Reduced to the angular graphics, the details are abstracted and the colors are vivid.

Acrylic on canvas, 36" x 48"
A bird's eye aerial view of a suburban development that repeats the houses and pools in order to show the differences and tell a story.The flattening of the picture plane reduces the details to a graphic.

acrylic on canvas, 12 x 12"
The aerial perspective reduces the traditional landscape to a graphic image by flattening the picture plane.
It combines elements of abstraction and representation, surface and illusion, as well as observation, imagination, and memory.A bird's eye aerial view of a ranch and barns.The flattening of the picture plane reduces the details. The shadows hint at a time of day and add some perspective.The juxtaposing of this color palette combined with graphic but soft-edged shapes convey a feeling of time, place and individuality.

acrylic on canvas, 48" x 48"
Seen from above these images of various size baseball diamonds becomes an abstract design by dissecting the image into many parts and the diamonds becomes the key element of the painting's composition .

Acrylic on canvas, 30" x 30"
This is an aerial view of the roof of a Manhattan residential building with a pool and terraces. It tells the story of a certain urban lifestyle and the flattening of the picture plane reduces the details to their graphic essence. It is a place of abandon viewed from on high.

Acrylic on canvas, 30" x 30"
Shades of green and red in amorphous shapes form a composition intersected by a flowing blue lake that takes you through the painting. The flattening of the picture plane eliminates any details.

This is an aerial view of a Traffic Circle. The flattening of the plane reduces the details to a strong circular graphic design. The shadows suggest the time of day and add perspective. The juxtaposition of this color palette combined with soft-edged shapes conveys a feeling of time, place and individuality.

Seen from above the highways become the linear design element of the painting. The multiple highways are the focus of the composition and take you through the painting.

An aerial view that looks down from from the Eiffel Tower in Paris. The flattening of the picture plane and symmetry reduces the details to graphic shapes, using more pattern and grid then representation

“Looking Down from Building”

An aerial view of a high-rise building in Toronto, Canada. The flattened surface plane reduces the details to a strong circular graphic image, using more pattern and shape than representation.

An aerial view. The juxtaposition of different houses portray a suburb of a certain upscale lifestyle. I communicate this through flattened surface planes that convey the textures of abstract space, as well as compositional aesthetics and skillful use of color.