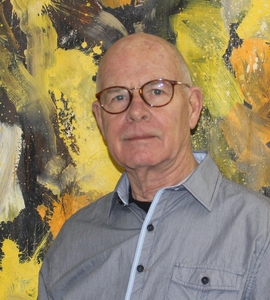 Born at 7th January 1940 at Kampen in The Netherlands. After a technical education he followed an education of drawing and painting at the Royal Evening Academy of Visual Art at Amsterdam in the years 1961- 1962. There after he was a self-taught man. Johann van den Noort lives and works in Kampen.

JOHANN VAN DEN NOORT is a Dutch visual artist and inventor. As abstract expressionist artist he connected his oeuvre inextricable with his band to the sea. Van den Noort is a renaissance man which the surplus value of art, science and life search and find in energetic cross-pollination. His civil technical innovations deliver solutions for world problems which have all something with water.

As artist Van den Noort takes already in a special position in the contemporary visual art. But there is more.. Not only by the fact that he is driven by the sea, but particularly the way he gives form and content at his passion, makes him to an artist who has conquered an own place in the contemporary art as painter and sculptor. JOHANN VAN DEN NOORT controls many techniques as: oil-painting, water colors, gouache, different graphic techniques, ceramic and sculpture. He has build up a tremendous oeuvre of about 4000 pieces of art. There are many publications about him in, art magazines, news papers and catalogues and for radio and TV. The most of his art works has found a way to collections all over the world. Johann van den Noort was nominated as artist of the year 2003.

Who thinks that Van den Noort as inventor operates in a total different field of activity, is shorting the artist as well as the inventor. The power of the renaissance man is hide indeed in breaking new thoughts and work. Red wire in all he is doing is: water. But inside these thematic limitation he claims all freedom which he thinks he need to use his talents and his opinion to use for projects which will give a worth fully contribution to deliver solutions of world problems. Just like his innovative projects arise, also his art works on the adventure of all that has to do something with water. Here too every thing turns on the enriching of our existence with new idea's, exceptional inventions and views an unexpected solutions. For Van den Noort is every artwork an invention and every invention an artwork. Johann van den Noort is often called: "The Leonardo Da Vinci of the twenty one century".

JOHANN VAN DEN NOORT received many international awards, as in October 2012 the Wall Street Journal Innovation Award and in May 2013 in the USA the most desirable EDISON AWARD both for his invention of the Twin Wing Tsunami Barrier .