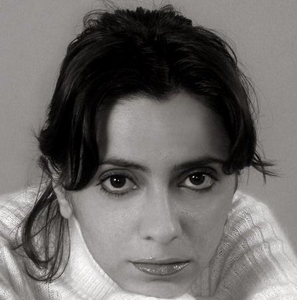 Daniela Cappiello was born in Bari on 28th of january 1978, but she lives and works in Città Sant'Angelo. She graduated at high school the “Liceo Classico Quinto Orazio Flacco” of Bari in 1997.
Her artistic job began soon in 1991 : she attended for few months the work shop of art of Italian painter Filippo Cacace where she worked as an apprentice studying in detail a lot of different techniques and copying the biggest artworks of the Italian and foreign painters by help of italian painter Anna Cacace.
Her first official debut is in 1993. She had solo and collective exhibitions in Bari, Lugano, Altamura, Bergamo, Roma, Milano, Torino, Bologna, Bitetto, Faenza, Genzano di Roma, etc..
She worked with Gagliano Gallery of Bari, making art works inspired by the old traditions of the Puglia.
Between 1997 and 1999 she showed with the Italian art foundation D’Ars Agency in Milano.
Daniela was begging to create the project “Beauty and Transparence” in 1999.
“The sunflower’s eye” one of her paintings became the cover of the booklet of Italian League Tumor of Puglia.
In march 2007 she attended to “ Michael Jackson Fan Art Contest”; in that occasion she won and met The King of Pop who appreciated totally her artworks.
In 2008 she has a solo exhibition in Bari, where she was born, showing twenty paintings where typical views of the old and new town.
In 2009 the famous critic of art Carlo Franza planed the solo exhibition at Pus Florence in Florence; also, he announced her win at Art of Award Culture of Award 2009 as emerging artist.
On May 2010 Daniela Cappiello showed at Benetton Store of Palazzo Mincuzzi in Bari.
On October 2010 she attended at AMACI – “ Forma e materia” at the gallery Il Borgo in Milano.
on June 2011 there was an international art competition Margutta Award where she token of part to.
On April 2012 she was at “Le Monde de la Culture et des Arts” in Cannes where she won a gold silver and on October she showed her works at Italian gallery Sabrina Falzone in Milan.
The people who wrote for her : Maria Grazia Chiesa (D’Ars Agency), Bianca Tragni ( Gazzetta del Mezzogiorno) , Vinicio Coppola ( critic and journalist of art), Rosalba Fantastico of Kastron (teacher, poetress and writer), Carlo Franza ( critic, historian, sociologist and journalist of art), Sabrina Falzone ( historian and critic of art), Daniele Radini Tedeschi ( historian and critic of art).

The beauty and transparence

“The monk and the rose”