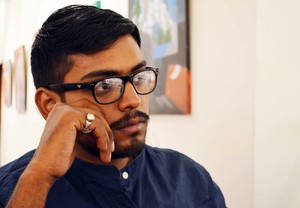 Everyone dreams of being in a true relationship in their life these days that is a rare things in humans and my works theme is based on that different kind of emotions in my surrounding area specially in youngsters life of phenomenon of relationship. It is here many realize that “Mirage” is the word truly defines relationship. As people started to value materialism over the human relationship and it is because of this the inner self of the one is being ignored and prioritized low when compared to the materialistic outer world.
Melancholy, believe & monogamy emotions theme of my paintings. In nature the bird “swan” is one of the creatures who have soul mates and this is what, I have symbolized in my work that how we as a human being should take inspiration from them. The expressions betray, selfless loves & hatred that defines love are the subjects of my paintings similar to the subject my technique is also realistic.
I have done my BFA in Painting from Jamia Millia Islamia University, Delhi. Currently I am living and working in New Delhi in my studio.

Education
• M.F.A in Painting from Kalinga University, Raipur (Chattisgarh)2016.
• Graduation in Bachelor of Fine Art (B.F.A) in Painting from Jamia Millia Islamia in 2014.
• Diploma in multimedia & web designing from Oxford Institute 2007 to 2008.