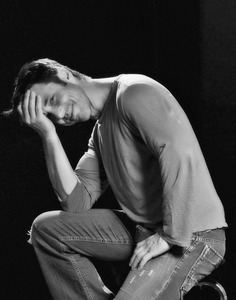 Josh's photographs have appeared all over New York in galleries and exhibitions, as well as on billboards and in subway stations. Whether it is the chaos of homelessness, celebrity, propulsive success or projected sentiment; capturing the individual, their unique survival strengths and the sudden discovery of calm in the center of personal storms drives Josh's portraiture.

With an eye toward social justice, Josh created the series, Becoming Visible, focused on New York City's fastest growing homeless population, transgender teenagers. In 2010, the first of these images premiered at the Robert Miller Gallery and have since appeared in galleries and museums all over the world. The series garnered the 2010 Photo Philanthropy award and was a centerpiece of the inaugural PhotoVille, now an annual photo event on the Brooklyn waterfront.

Josh lives and works on the Upper West Side of Manhattan and is a graduate of Boston University's School for the Arts and The International Center of Photography.

“HAMILTON” is a cast of revolutionaries. Night after night, this band of young rebels raises their voices to the darkness in an inspiring uprising of song and spirit. They are at once our history and our future, inciting rebellion and leading the way to change. Like the
revolutionaries who embraced Alexander Hamilton’s vision for a new America, the remarkable actors in these photographs embraced Lin-Manuel Miranda’s vision for a new American musical.