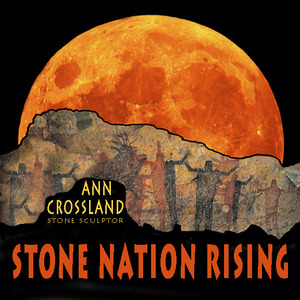 Ann was born in the Cherokee Nation of Oklahoma and is a member of the the First Families of the Cherokee Nation & a tribal citizen. She spent the latter part of her childhood in Wyoming and has lived in Colorado, California, Arizona and Oregon.
Educated as a biologist, the artist is influenced by the natural creatures, forms and colors that surround her. Ann’s heritage (Native American & Celtic) has instilled a traditional, respectful belief that spirit exists in all places and all things.

She studied metal sculpture in CA & AZ and transitioned from an award-winning metal sculptor in AZ to a self-taught painter in OR. Her first solo showing of low relief acrylic paintings was in central Oregon in 2003. After returning to AZ, she began carving gourds in early 2006, showing at exhibitions in Sedona, Jackson Hole, Tulsa & the Phippen Museum of Western Art. One of Ann’s carved gourds, “Robber” is owned by Native American Grammy winner, R. Carlos Nakai. Under the tutelage of Ante Marinovic, Maestro de la Pietra, Ann began sculpting stone in the summer of 2008. Her stone sculptures have appeared at the prestigious Heard Museum in Phoenix, the Coconino Center for the Arts in Flagstaff and at several events in Sedona. Ann presently resides in the greater Sedona area of Arizona where she paints, carves & sculpts in her home studio.