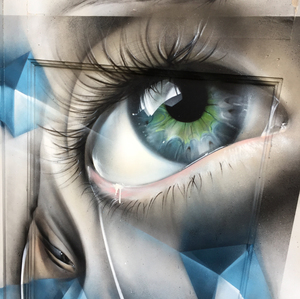 GOMAD (Marcus Debie) was born in the city of Sittard, The Netherlands, in 1972 and still lives and works there.

His artistic passion has been fostered by the movie Beat Street and the graffiti documentary Wild Style: he has been therefore developing
an interest in the graffiti scene since the early 80s, being one of the pioneers in the south Dutch graffiti scene. Due to these artistic
experiences which GOMAD has started in those teenager years, he began his creative path. He has been seeking a personal painting
language and abilities for more than thirty years, in which the art of graffiti and murals plays a central role, while dedicating time to his
own academic education to be a full time muralist and painter.

Illustrations, which is the subject he got his graduation in at the Academy of Arts in Sittard, has an important impact on his work along
with classic Greek art and statues, (sur)realism and cubism also known as post-neo-cubism. This can be recognized in GOMAD’s attempt
to harmonize anatomic proportion and graphic dynamics true craftsmanship and skills. GOMAD creates a style in which time is considered
as a concept, which by being closed into immaterial solid shapes, is crystallized into geometric shape in order to revisit the idea of the
perpetual presence.

Nowadays he paints murals and exhibits his pieces on canvas in street art galleries worldwide and he travels wherever his arts bring him.