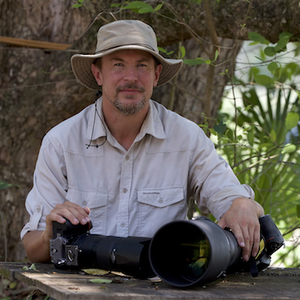 I wanted to be a photographer when I was 15, but my mother said I could always take it up later – so that was that for 30 years!

I ended up reading English at Oxford and working as a strategy consultant for a few years, both full-time and freelance, before 'retiring' at the age of 29! I then travelled round the world for seven years, doing four ski seasons and working on an internet start-up in San Francisco among other things, before finally returning to London in 2005. At that point, consulting work felt too stressful, so I decided to go 'qualify of life'. I'm now a private tutor and wildlife photographer, both of which came about quite by chance.

I started tutoring in 2009 when I happened to read an article in the paper called 'Ten Ways to Beat the Recession', and I started taking pictures again in 2013 when I received a random email inviting me to go on safari and climb Mount Kenya. After investing in a decent camera, I've been a wildlife photographer ever since! I’ve taken pictures in 25 countries on all seven continents and won various awards including the Sunday Times/Audley Travel Big Shot competition.

As well as taking pictures myself, I'm also available as a photographer/guide for those interested in private safaris, and you can find details of all the trips I'm leading on the Events page.

My experience as a private tutor lets me be very patient and understanding with anyone who wants to get the best possible pictures on safari. On game drives, I'm always happy to answer questions, whether it’s about camera settings, the rules of composition or just identifying all the different species of wildlife. Back at the camp or lodge, I'll run various sessions to familiarise you with camera technique, provide feedback on your images, show you my ‘Shot of the Day’ and even invite you to take part in a photo competition.

I want to produce the most beautiful and powerful images I can, and I won’t be satisfied until I've captured a few images I think are worth five stars. These are my absolute favourite shots, and I've only produced around 150 of them over the years, so these are the special ones, the ones I'm most proud of. They can show any subject – not just wildlife – but they must convey the magic of being there.

I started out taking 'portraits' of animals. That was all very well, and a lion may look beautiful sitting on the African savannah or a jaguar prowling through the Brazilian Pantanal, but there isn't much energy in those pictures. What I try to do now is to produce 'action shots' when the bird or animal is in motion. I still take portraits - and sometimes you don't have a choice! - but my ideal image is much more likely to be a cheetah chasing down an impala than a bird perched on a branch!

My favourite animals are the predators, and the wonder of the long lens is that it can fool people into thinking they are right up close and personal with a very dangerous beast. It’s that sense of excitement that I try to capture in my work, and I'm happy to use whatever technology I can find to do the job. I regularly rent an 800mm Nikon lens for close-up shots, and I've just bought a Nikon D850 camera body with a 45.7 megapixel sensor and the ability to shoot nine frames per second. All that, combined with the wonders of Lightroom, gives me the best possible platform for capturing the power and beauty of the animal kingdom.

Wildlife images from around the world

This image has been sold over 1,000 times and won first place in Art Room Gallery's 'Nature' competition in March 2018 (see video). It was also among the editors' favourites in the National Geographic Nature Photographer of the Year Contest 2016, won a Gold Award in the August 2017 Monthly Photographic Competition run by the Society of Photographers, was twice runner-up in The Daily Telegraph's weekly Big Picture competition (here and here), was a finalist in the Fusion Art Open Art Exhibition (see video) and was Highly Commended in SINWP's Our Colourful World Photography Competition.

A poster of my jumping penguin also appeared on the inside of Sam's locker in the US teen drama Atypical! How cool is that...?!

“Bear about to catch salmon in mouth”

This image won the Sunday Times/Audley Travel Big Shot competition in January 2017, won first place in Art Room Gallery's 'Nature' competition in March 2018 (see video), was a finalist in Fusion Art's 3rd Annual Animal Kingdom Art Exhibition in January 2018 (see video), was National Geographic's Photo of the Day on 2 August 2017 after being chosen in their Daily Dozen and was among the editors' favourites for Week 10 of their Travel Photographer of the Year competition. It also received nearly 25,000 likes on their Instagram page!

"Timing is everything in photography, and this image is a great example of that. Excellent use of your 300mm lens to capture this moment right here. I love how you composed the image and went with a medium frame and didn't get too close or tight on the bear. There's some nice spacing around the subject and this makes for an excellent wildlife image." Matt Adams - Producer, National Geographic Your Shot

"Well it is a well known spot for grizzly fishing but you have timed this perfectly earning a well deserved mark of excellence." Judge's comment

This image won first place in Art Room Gallery's 'Nature' competition in March 2018 (see video), won Special Merit Awards in LightSpaceTime’s Nature Art Exhibition and Animals Art Exhibition, was shortlisted in the Wildlife Insight category of the 2017 Outdoor Photographer of the Year award, was chosen as one of the Editors' Picks in The Independent Photographer's Emerging Talent Award and was a finalist in the Fusion Art Open Art Exhibition (see video) and TZIPAC's 6th Zebra Awards.

An elephant is throwing dust over itself with its trunk on a bare earth slope with trees in the background under a blue sky. It has mud stains on its trunk, and the dust is exploding in a cloud against its wrinkled grey skin. Shot with a Nikon D810 in Chobe National Park in Botswana in April 2016.
ISO 140, 85mm, f/8, 1/500

This image won first place in Art Room Gallery's 'Nature' competition in March 2018 (see video), was a finalist in Fusion Art's 3rd Annual Animal Kingdom Art Exhibition in January 2018 (see video), was National Geographic's Photo of the Day on 9 October 2017 and received over 21,000 likes when it was featured on Instagram! It was also runner-up in The Daily Telegraph's weekly Big Picture competition and Outdoor Photography's Reader Gallery.

“Pig peeping out from behind wall”

This image was a finalist in Fusion Art's 3rd Annual Animal Kingdom Art Exhibition in January 2018.

A Bengal tigress with a catchlight in her eye lies up to her neck in the dark shadows of a water hole. Her name is Maya 'The Enchantress', and she has orange and black stripes with white patches on her head. Shot with a Nikon D810 in Tadoba Andhari Tiger Reserve in India on 13 May 2017, which just happened to be my birthday!
ISO 220, 800mm, f/5.6, 1/1000