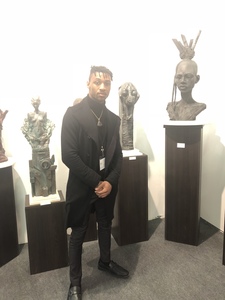 Biography
Born October 13th 1995 Austen Brantley is a self-taught American ceramic sculptor from (and based out of) Detroit, Michigan. He initially had no knowledge of his artistic abilities until he reached his junior year at Berkley High School in 2011. Austen was inspired by his BHS ceramics teacher who saw his potential to succeed in things he thought weren't possible; as a result in 2013 after a mere two years of sculpting Austen began receiving local and statewide recognition for his creations, which has resulted in over 13 solo exhibits completing over 500 sculptures in the time he started and multiple requests for future shows. Austen's art has been displayed at Grand Rapids City Hall, the Charles H Wright museum ,and has been displayed at Detroit Institute Of Arts in conjunction with the 30 Americans Exhibition, and most recently at the Museum of Science and Industry in Chicago. He has been interviewed for PBS and local new channels. Austen Brantley is an artist to watch: he has grown from an amateur sculptor to an upcoming international artist who has the gift of speaking artistically through the clay he sculpts.