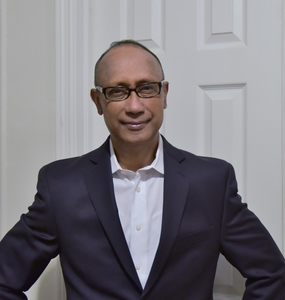 Nakibul Ghani Ahsan was born in Nagaon, a town steeped in art and culture, in the beautiful state of Assam, in the foothills of the Himalayas, in northeast India.
Coming from an old aristocratic family, with both parents known for their high aesthetic sense, Ahsan was introduced to art at a very young age.  But he kept art as a hobby, a passion, and remained a self-taught artist till now.  His earliest works include among others, two magnificent murals, done on the walls of his ancestral home in India.  Ahsan finished Higher Secondary School Examination, in Arts stream, ranking 5th. in the state of undivided Assam, when Shillong was its Capital.  He got his Bachelor of Arts Degree, with Honors in History, from the elite Cotton College, under Gauhati University, and Master of Arts Degree in History, from Delhi University. After three year Graduate and two year Post Graduation in Business Management, from the Anglian Regional Management Centre, now Forest University of East London, and working for few years in London, Ahsan moved to the US, and spent many years as a restaurateur in New York City, where most of his patrons were from the field of arts and culture.  Although he continued with his love of photography;  drawing and painting had taken a backseat for few years.  But once he picked up the brush again, Ahsan started creating works of art, which now stand at more than a hundred:  Oil on Canvas, Acrylic on Canvas, on Paper, Mixed-media, which are strewn all over his New York apartment, where he lives with his wife, Syeda Jebeen S. Shah ( Poet, Translator and Writer).  Ahsan spends his time between Reading, enjoying Classical and Semi-Classical Music and Indian Classical Dance, cooking gourmet dishes, and flying kites on the beach.  An intensely private, family person, Ahsan is now looking forward to exhibit his work of art publicly, to share with the world, what has always been his joy of life.

Music in the Air

“The Tune of the Orange Moon”

“A Lamp and the Book”