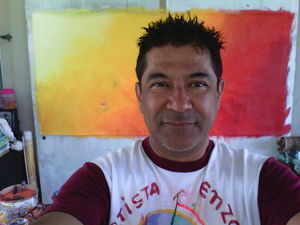 Enzo, is a Venezuelan painter born in 1963, his great promoter of art was his mother, a nurse from a hospital located in a city north of Caracas; his admiration for art was such that when his two sons were born, he called them Miguel Ángel and Rafael Leonardo; in honor of the great masters of art. At school age it was usual for his mother to buy him: art magazines, turpentines, oil pipes and canvases with
prints of figures to be painted; with which very soon his house became an entire art gallery with varied paintings: still life, landscapes and human figures; his paintings of tenuous colors and little brightness, lacked any technique.
On the initiative of his mother he enrolled in the art school, Arturo Michelena of the city where they lived; but in both attempts, since I was not very good in the studies I did not pass the pre-selection tests.
The following year and with 17 years left the school and with approval of his mother left to the capital in search of more opportunities; already installed in the new city in 1981 tries to enter the art school Cristóbal Rojas, failing again in his attempt, this time for not having the required studies for admission. With the options to study exhausted Art you must undertake the search for a job for the
Survival, which is not long in coming and becomes a bank employee moving away from art, until 1994 when by chance the owner of an art gallery offered him employment as manager of the gallery workshop, which meant his great step To the world of art, the stay there was short, since in 1995 he decided to set up his own art workshop in a small rented space.
The initial paintings were more figurative, you could see elegant women and men in bars sharing tea time; restaurants, awnings and hats adorned the atmosphere of his works very Parisian-style influenced by the art magazines that his mother had bought him as a child.
In the summer of 1996 they invited him to participate in an art exhibition to celebrate 50 years of a public institution with the exception of also inviting another painter to complete the exhibition of the room together with him; Since I did not know more artists to invite, I chose to paint the same three completely abstract paintings, which he signed as Enzo.
On the day of the event, he organized the entire exhibition in the living room, to the surprise of Michelangelo's paintings went unnoticed, while the signed ones like Enzo caught the visitors' eyes, achieving the sale of two pieces exhibited.
Since then he has been dedicated to abstract expressionism through self-learning, now his work has texture, elegance, while integrating recycling materials and bright colors that speak for themselves trapping the viewer. His works are exhibited in large cities and art exhibitions in: Panama, Madrid, Caracas, Miami and New York.