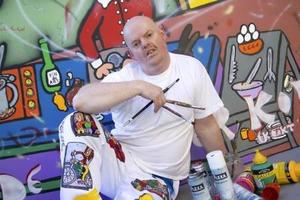 Biography
Johan Huijzer was born on 24 September 1964 in Sliedrecht, Netherlands. His artwork is very powerful, merry and colourful. He has a very inspiring and distinct style that is characterized in the art world as the pop art style. Johan has captured many hearts with his style. Individuals, companies and galleries both at home and abroad already have a real Johan in their possession.
Johan draws his inspiration from everyday things, for instance via television, newspapers, magazines, statements or events, so essentially from anything he hears or sees around him. Johan also issues various objects of art and business gifts, such as original ceramics and sculptures. Bespoke orders are also negotiable.

Some examples of  leading national and international companies are: SBS Broadcasting Group, BMW Breeman, Loyens & Loeff, Vacuvin, Fortis, Herman den Blijker, Westin and Starwood hotels, Jan des Bouvrie, McDonalds and many others. Johan also honorary works for various charities like Kika, Dada Foundation, Liliane Foundation, Sharing Succes, Heartbeat, Villa Pardoes en Jack Rabitt Foundation. Johan donates his own works of art which are then auctioned with the full proceeds going to the charities.
In April 2018, after well over fifteen years, Johan set out expressing his artistry in his beloved contemporary art style on canvas. This is already bearing fruit and his new contemporary art style is valued by art critics. So from now on you can enjoy different styles from the artist.
Johan has also given many interviews for newspapers and luxury magazines with his art. In short, with his art you bring joy and many colors in your home, company ect.

Highlights in the art career of Johan Huijzer
1972. - Discovery of his talents by family and tutors at the elementary school.
1974-2002 - Various drawings, paintings, birth signs, wall paintings etc. made for third parties, giving the artist the impetus to make money from his creative expression.
2003 - Start of his career as a fulltime artist
2004 until now - Collaboration with numerous galleries, expositions, art loan and art trade. Also fulfilled many commissions for leading companies and institutions.
2008 - Exposition of works of art of the top 25 artists for the Joop van den Ende Theater Production musical Evita in the Parktheater in Eindhoven.
2011 - The only ever pop art version of the Nachtwacht (Night Watch by Rembrandt), made by Johan in his well-known style with the exactly corresponding size (363 x 438 cm) and displayed in the Rijksmuseum in Amsterdam. This painting is currently on display in the ROC Leiden, the birth place of Rembrandt van Rijn.
2015 - Unveiling of the national monument for children killed in domestic violence. Johan was commissioned this special monument and it is now located on a prominent spot in front of the well-known manor Zeist