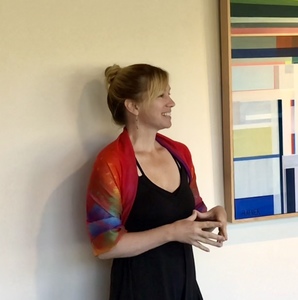 American artist Shilo Ratner was born during the late 1970’s in the beach town of Brant Rock, MA. She launched herself into the arts in high school with various media before obtaining her degree in design in 2000 from Curry College in Milton, MA. She furthered her studies out east at the School of the Museum of Fine Arts Boston as well as at Massachusetts College of Art. Her pursuit of a career in painting brought her out west to San Francisco where she earned her MFA in painting from the Academy of Art University.

Ratner’s life long pursuit has been for a deeper understanding of truths in spiritual traditions and the common thread that unites humanity. After earning her MFA, she traveled internationally with intention, intrigued by the symbols and practices of many religions. During her travels she visited Buddhist and Hindu temples in Malaysia and Indonesia. In a rural village in Brazil, she had a powerful shift in consciousness that inspired her series “From Within”. Always returned to contemporary life between these significant journeys has allowed her to express work that is about the “whole” experience vs only focusing on one or the other as her approach embraces various spiritual and cultural experiences through a visual language rooted in the San Francisco Bay Area.

In 2009 Ratner was recognized with an award juried by Bay Area Figurative artist William Theophilus Brown in a San Francisco based exhibition. In, 2016 she was once again presented with an award at the “The 105th Exhibition”, Mystic Museum of Art by Jurors Darby Cardonsky and Will Lustenader in Connecticut. Her work has been selected for exhibitions by jurors Theophilis Brown, Rita Gonzalez, Dore Ashton, Dean Sobel and Donna Seagar. Ratner’s work has also been exhibited in museums such as the Museum of Contemporary Art, Marietta/Cobb Museum of Art, Mystic Museum of Art and The Slater Memorial Museum. Other venues where her work has been exhibited are the African American Culture Complex, Los Angeles Art Association, First Street Gallery, NYC and Hang Art Gallery. Ratner’s work can be found in myriad of private art collections in the United States and abroad.

Shilo Ratner currently lives in New Haven, CT and is an active practicing artist in the New York Metropolitan area.