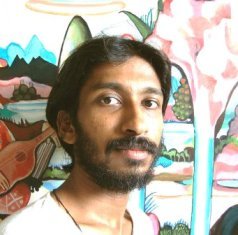 ‘Eye within group show’ for young artist 2008 at -kolkatta

“Night Shift” defines night and tries to capture its phantasmagoria. This painting is a realization of the “reality of a dream” through a microscopic view. Hence all intricacies of a nightlife have been portrayed such as dreams, eerie fantasy, etc.