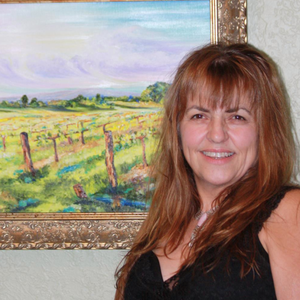 An accomplished and award-winning multimedia artist and musician, Nedra Russ is a vessel of creative energy steeped in tradition. With subjects ranging from Italian vineyards to Janis Joplin and other contemporary musicians, to 3D paintings capturing the spiritual essence of nature’s warriors, dragonflies, wolves, and bumblebees, her work details the visual and auditory legacy of the human experience. Nedra’s paintings and songs can be seen and heard across the United States and as far as Europe, Asia, and Australia

Nedra Russ’s The Harmonica LadyTM line of jewelry features miniature, fully- playable harmonicas. Her designs earned her the distinction of being the very first HOHNER USA Juke Joint Representative accepted on the basis of artistic

representation of the instrument. Since its founding in Germany in 1857, HOHNER has been crafting high-quality harmonicas and other musical instruments, including accordions, guitars, and mandolins, to name a few.

Following an intensive course of study, Nedra is now certified by the renowned Berklee School of Music as a Modern Musician Specialist with emphasis on Songwriting, Musicianship and Music Production.

In 2009, Nedra studied speech-level singing with Daniel Hayes in Roseville (DEHTM) and with Brett Manning’s Singing SuccessTM program. This foundation led to giving speech-level singing lessons to local youth in her hometown of West Point, CA. Along with Art classes, her volunteer work earned her the community’s gratitude and the Teamagic award from the Blue Mountain Coalition for Youth and Families in 2010.

Nedra’s grandfather inspired her to first pick up the harmonica at age 12 and she never put it down. She refined the skill by participating in master classes in San Jose in 1999, 2009, and 2010, working with such greats as David Barrett, Dennis Gruenling, Howard Levy and Joe Filisko at the classes and in subsequent online course offerings.

Nedra, an active member of SPAH (Society for the Preservation and Advancement of Harmonica), has been to their annual conventions in Sacramento, CA and Virginia Beach, VI. Nedra will have her booth at this years SPAH in San Antonio Texas. Nedra and Julio will be holding a seminar

Creating the Music
Nedra Russ & Julio Guerra
This husband and wife acoustic duo will show you how a team works, writing original material, working out songs, making cover tunes your own and doing shows. You don’t have to be in a duo to attend. Bring your harps.
Check the link below for more information.

On Nedra and Julio’s 2012 album of original music, “Everybody’s Been Somewhere,” Nedra produced the album from start to finish. This album was selected as the World Of Harmonica (UK) Peoples Choice 2nd place winner that year.

Also, in 2012, Nedra was ranked 94 on the list of All-Time Top 100 Harmonica Players by the World of Harmonica.