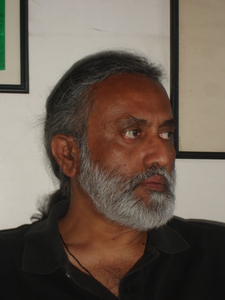 Sudhir Pillai was born in Coorg, Karnataka, India in 1953. He spent his childhood in Orissa, often in small idyllic towns. He never went to school. He studied at home, fervently reading up on everything he stumbled into. He painted, listened to music or spent the entire day outdoors discovering the magic world outside. His friends were the common people he met every day, in the many neighbourhoods and towns he lived in. His sensibilities were shaped by these experiences, without the rigid discipline of school.

After completing his Masters in Applied Economics he moved to New Delhi in 1975. He started his career as a print journalist but his interest soon shifted to designing. In late 2005, after a successful career as a graphic designer, he took up painting full-time.

It is the spontaneous experience of his early days juxtaposed with the complexities of the metropolis that gives shape to his compelling visuals, today. His subjects are always the common people – a rickshaw-puller, groups at street corners, the mendicant singer, and the woman passing by.

In his paintings, Sudhir captures the vignettes of real life in his own medium without any embellishment. It is this simplicity of style that defines his work. There is no attempt to impose an external structure, or to interpret the situation with any preconceived norms. It is the subject that is central; the canvas is only a medium for it to be presented.

Sudhir’s paintings are on display at well-known online art galleries and are part of many collections in India and abroad. Sudhir lives in Chittaranjan Park, New Delhi, India.

There is a street near New Delhi’s colonial heart that is a heady cocktail of desi kitsch and global hip. In Paharganj, Russian and Hebrew computer keyboards, Spanish menus and screaming neon signboards coexist with books and posters of Karl Marx and the Dalai Lama, and rudraksha strings. This is the first brush with India for the budget-tourist.

The place, with its riot of colors and images is a natural semiotic inspiration for the artist. It is a collision of what is quintessentially Indian and the nirvana-seeking universe of Lonely Planet.

It is an ever-changing secret corner, and a world unto itself that is frozen in tourist guide books. Located in the heart of India’s hippie-trail, Paharganj is where all the stereotypes of the world come together – the bewildered budget tourist, the pushy, can-do Indian tout, cameras aimed at beggars and cows, and shopkeepers speaking several tongues.

For the beleaguered back-packers, Paharganj is home.

Realistic paintings in oil and acrylic on canvas.

A tourist family with kids at a roadside cafe in Paharganj

A young female tourist walks past a crowded street in Paharganj

A tourist couple crossing a crowded street in Paharganj

A young Japanese tourist in white skirt and cap, and a pink top, with a red ruck-sack hurries past an empty street in Paharganj