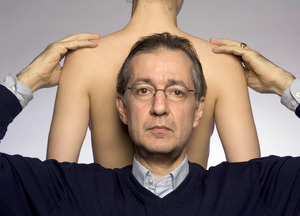 Günter Knop - Biography
Günter Knop began a career in photography, working with fashion photographer Charlotte March in Germany, following his studies at the Christian-Albrecht University.Knop later worked side by side with Henry Wolf, influential Art Director for Esquire and Harper's Bazaar magazines in New York for many years. Together they created trend-setting TV, print and fashion advertising for major clients. Knop eventually opened a studio of his own in New York.
His work has been featured internationally in a variety of magazines, books, group and solo exhibitions. In 2005 he released his book Guenter Knop on Women, which features his trademark black and white nudes.

Inspiration for my photographs comes through observations of life and light. Although I experiment with photographic themes, my focus is the translation of the nude of everyday women into timeless pieces of art. I work with 35mm film because of its textural quality and endless possibilities for exploration. The majority of my work is created in the studio where I can control light, which my favorite tool. Light is a silent language that creates visual depth and directs the viewer to specific points of focus.

My set design is influenced by communication with my subject and as a result the characterization of each subject varies from shoot to shoot. I photograph only non-models because they possess a more fluid self-expression. Some artists draw on the repetition of themes, but I tend to portray each woman in a different way than the one before. I find my challenge in the variation of the approach and in the need to capture the moment in just one roll of film.

Cubism in one shot. A guess how cubism was discovered.

“The call for freedom”

The shadow the way it appears reminded me of the painting of Edvard Munch.

“A piece of paper on the floor.”

The desire to be.

Portrait of an actress

“The face of the underworld.”

Round and round it goes. Where it ends nobody knows.