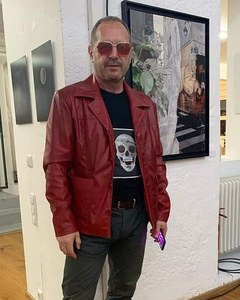 Originally from Eastern Europe, Boré Ivanoff is a Paris based, modern figurative artist.

Since 2012 Boré essentially paints Paris.
Subtle blend of glory, pain and suffering, the city of light is his greatest sourcle of inspiration. Trying to intrigue and surprise his audience, he focuses on transcribing an unconventional Paris, unexpected, enigmatic, "never seen".

Between the abstract and the real.
Sophisticated and complex, Boré Ivanoff's works oscillate between abstraction and realism.
The artist manipulates shapes and colors and reinvents reality to make it subtly abstract but always recognizable.
In his compositions where interiors and exteriors intermingle and seem inseparable, Boré experiments and explores the boundaries of reality.

For Boré Paris it’s the kind of place that offers the right combination of inspiration and pain and suffering to keep him stimulated and painting.
Independent and self-confident, with a remarkable ability to surprise and intrigue the viewer ... he prefers the enigmatic, the unconventional, and the unexpected. His work is precise, yet it teeters on the threshold of delirium and chaos.
He brings outrageous levels, of pictorial realization to his work. His compositions are a sophisticated exercise in the manipulation of form, keyed-up color, density, illusionism, brushwork, and compression.
The interior and the exterior merge to produce a single image whose complexities are almost impossible to untangle. The result is which the abstract nearly trumps the real.