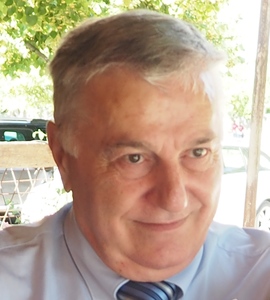 Nicola Rizzo was born in 1948 in Cardile, a pleasant hilltop village in the Cilento National Park, in the province of Salerno, where people have always worked their fields and small fields hard and from which very often they went away, sometimes without ever coming back, looking for for himself and his children new job opportunities, often responding to expectations in the craft, professional, medical, musical, artistic, entrepreneurial fields ...

From his middle school years he applied to drawing and painting with the use of the first oil colors, he also made drawings with China ink or with pyrograph on wood, strongly attracted by the passion for art.

He started his classical studies and after graduating as a primary school teacher, he also graduated as a computer programmer. But in the end he became an independent interior decorator, for which he was continually engaged in perspective design.

As soon as the cyclone of the great economic crisis that we are still experiencing appears, in 2000 he moved to the North-East, in the province of Treviso and returned to primary school in the role of teacher. It is a particularly important moment for cultural, spiritual and human growth ...

Children try to convey the best of themselves and not only with watercolor or mosaic workshops, so much to receive in June 2014, when they leave school for good, touching testimonies of affection and gratitude from an entire class of students 4th of Barbisano primary school (TV).
On one of the sheets written for the teacher it read: "Master Nicola, we are proud to have had you with us, because you taught us so many beautiful things: we will always carry you in our hearts, as we hope you will also do with us ..."

Finding himself in a geo-historical context linked to the war front of 15-18, he felt the need to draw up the Gold Book of the Fallen of Gioi Cilento during the Great War, available online by typing “Mai più la guerra, di Nicola Rizzo, Gioi".

The purpose is to find out the burial site of each infantryman who fell into conflict.

It is during this study and research work that he feels the need to put his hand back to art, with a drawing in Indian ink and watercolors, to describe the sinking of a ship and particular places, linked to the sacrifice of his fellow villagers in G. G.

The need to illustrate precise historical facts through simple pictorial works makes him discover a door to which he had never before given the necessary attention and, thanks also to a meeting with a Franciscan friar, Maestro Flavio Zulpo, with whom he approaches the writing of is a sacred icon, it learns to dominate and control its impulses and emotions, internalizing a precise method of artistic work.

Thus, solo, as a climber with his ice ax, he sets out to conquer the mountain, of art, obviously, encouraged both in his family and by many friends of all ages, followed only by the criticism of his family, including a son architect.

His painting, which is inspired by Italian landscape painting and Russian landscape painting at the end of the 1800s, is strongly linked to the beauty of Mother Nature and to how great the man has produced in his history. It follows a very personal style of research and each job performed, which is usually characterized by intense shades of light and shadows, entrusts more than one task: to instill serenity and arouse deep meditation and introspection in those who admire it.

He has received several prizes and awards, such as the "Marco Polo International Art Ambassador", "The Best Artists Modern And Contemporary 2015", "Arte States", "Artist Of The Year 2015", "Excellencies 2015", "International Tiepolo Award - Arte Milano 2017 ", International Career Award" Colosseo-Artisti nella Storia "2017, Insertion on Catalog of Contemporary Italian Artists by V. Sgarbi," Trophy Art Empire "," Prize of the Critic "Principe Di Salina-Gattopardo", "International Art Milan Award" by V. Sgarbi 2017, "High Recognition I Guerrieri Di Riace", "Tribute To Caravaggio" Award, International Prize "Spoleto Art Festival 2018",Insertion on Catalogue “2000 Artists”, High Recognition “Yulius Caesar imperator” 2018.
It is present in various catalogues and art magazines, deposited in the main museums of the world. An important addition is that of Prof. Pinto on a text used in university/academy, “L’Evolution Of Modern Art in the XXI Century”. Many newspapers, including Il Corriere Della Sera, Il Messaggero, La Notte, Friuli On Line, Frosinone Magazine, Cilento Notizie, Il Saggio have all spoken about his works and his stages in the climb of his career “mountain” in a flattering and rewarding way.
It lives and operates actively in Oderzo.