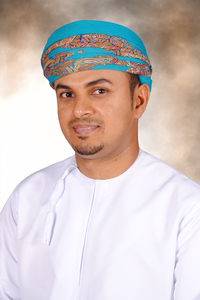 Dr. Salman Alhajri is an artist, graphic designer and researcher in the field of visual arts. Academically he is an assistant professor of Graphic Design, at Department of Art Education at Sultan Qaboos University, Oman. In 2005 Alhajri graduated from the University of Technology, Sydney with MsDesign. In 2013 he graduated with a PhD from School of The Arts of Loughborough University in the UK. In 2014, he won a bronze award of design in the world's largest design competition in Italy “A' Design Award & Competition”. Alhajri participated in many local and international exhibitions and conferences. He took a part in presenting lectures in arts and design conferences in Chicago, London, Glasgow, Kobe (Japan), Croatia, Rome, Kuwait, Bahrain, Amman and many others. Nationally, Alhajri is a member in the Omani Society of Fine Arts and the Youth Studio as well as a member in many technicalscientific and academic institutions, internationally. Dr. Alhajri seeks to see the flourishing of fine arts and graphic design in the Sultanate.He presented his own artistic style, experiences, philosophy with a contemporary vision that is distinguished by its simplicity, color harmony, composition and the influential ability. His work is distinguished also by the diversity of the arts practices including abstract, expressive, digital art, and Arabic calligraphy. His designs and artworks represent Omani culture, people and heritage in several of forms. His artworks collected by several governmental and privet institutions, and individuals including, Qasr Al Alam, The Sultan Qaboos Cultural Center, at Sultan Qaboos University, The Sultan Qaboos Mosque in Sohar, Dhofar Municipality Salalah, and Prince Charles.

Salman Alhajri, recently conducted a solo exhibition in Kuwait, in which he displayed a “Blue manifestation” the artwork that has been selected to participate at 8th Beijing Biennale, 2019. The title of the exhibition "The Village" indicates the place that artist Dr. Salman Al Hajri is strongly belonging to. He is from a town called Bidiya in the middle of the Ash Sharqiyah region in Sultanate of Oman. This town is well known for the sand dunes that is surrounded by palm and mango trees in each side. This town is rich in its heritage, agricultural and nomadic culture which make it become a tourist destination in the Sultanate. The young artist in his childhood had been very fascinated by the sand and the clear sky. He was totally amazed by the magnificence of the moon and stars. This rich experiences had been documented in AlHajri’s imagination and shown many features of beauty since his childhood. At the end of his second decade, he moved partly to Muscat in order to study arts at the university, graduated with excellence and was appointed as a lecturer in the university. Then he traveled to Australia to complete his study for two years and then he traveled to United Kingdom for four years, where he completed his PhD. In the same period, he visited many countries in order to document and draw those places in his paintings.

Al Hajri presented his own personal experience in fine art with new contemporary vision and new styles that is distinguished by its simplicity and the influential ability. There is diversity in artworks provided by Al Hajri in this exhibition. Most of the paintings are abstract, as well as three works carried out by Al Hajri done in contemporary techniques which is by phone and iPad drawings. Al Hajri is known by his ability to use various trends of fine arts like expressive, digital, and contemporary art. During the last period, he was known by his promoting of digital art (phone arts). He presented lectures in this area and wrote some articles about this new trend in art.

Thoughtfully Al Hajri provided his art in this exhibition so that most of the paintings are lined in a way to provide in order to bring rich and renewable visual representations. Thus the painting as a whole appears as an integrated, harmonious and coherent artwork. These artworks provide new concepts and contrary definitions to the most common shapes, through experimentation in a new world that is filled with choices, color relationships and new shapes. Thus confirming the need for experimentation process to bring life according to a new artistic vision and philosophy of beauty that takes experimentation as basis for it.

This artwork inspired by Omani heritage which is very rich artistically. It is an abstract artwork and it is a unique technique of using ornamentals and decorative icons that usually appeared in Omani architects and custom clothes. Omani artist Salman Alhajri is very skillful in acrylic paintings, Arabic Calligraphy and digital arts. His journey in Arts are more than 25 years of practicing. more info are in www.salmanalhajri.com

4. Horizon, Acrylic and and colored marker pens on Canvas, 75X75 cm, 2018 more info are in www.salmanalhajri.com

5. Memory of a house, Acrylic and colored marker pens on Canvas, 75X75 cm, 2018, more info are in www.salmanalhajri.com