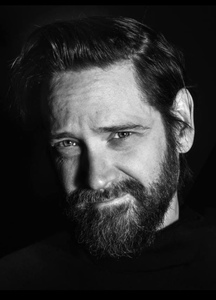 Safely cradled in the arms of the cartoon characters he was able to draw with his eyes closed by age 5, Bruce has always been an artist. From Spielberg to Robert Williams, as well as Warhol, Todd Schorr, Rockwell and even Disney, he absorbs contemporary aesthetic trends that are woven together with more classical inspirations. Fascinated by the works of the great masters, Fragonard, Boucher and Bosch, Bruce is striving to reinvent a Baroque aesthetic made for today.


Bruce’s many years in design and advertising have also greatly influenced his style. He enjoys using engaging, seductive colours and processes to unchain his dystopian world. Contemporary figures evoke the over-the-top style of underground cartoons, while the richness of detail in other elements is mindful of the aesthetic rigor of ancient painters. Bruce’s unique anachronistic style is further expressed by his choice of mediums – oil freely mixes with synthetic mediums to capture the sensibility of the past while pushing forward to unleash the energy of what’s to come.


“For about 20 years, I've been deconstructing and reconstructing classical art, by injecting the influences I got from being a kid growing up in the 80's and 90's. As a child, I was constantly cartooning. As a young teen, I started experimenting with art and then had the impression that cartoons where never taken seriously in the fine arts world. After seeing my mother do oil painting at her easel, installed so comfortably in her bedroom beside her window. The sun was beaming on the paint tubes and it gave me this envy to try it on my own. So I stoled a few tubes and brushes and started painting. I use to paint cartoonish characters from the underground and after a couple of unfinished paintings, I started experimenting with my style. I had the impression that cartoons weren't considered nor taken seriously in the fine arts world, so I thought studying what seemed to me as the most serious and respected art style, which was classical art. But whatever I did, my cartoon visual language and line shapes, seem to always bleed through my work. I was intrigued by the contrast and clash effects between the two styles. So I started building up on the paradox between these two genres, mixed up later with my influences from being a designer and art director in advertising.