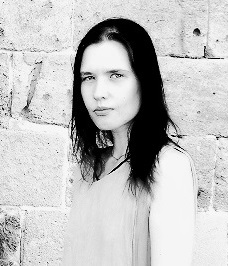 I am a contemporary artist, creative thinker and writer working with a variety of mediums, ranging from paintings, installation work, ceramics to fashion and poetry.

Having studied Interior Design in Perth, Australia, I have been particularly interested in conceptual and product design. Working with three-dimensional objects and materials has later lead me to fashion styling and design in Melbourne, Australia. Since moving to Cyprus, I have undertaken abstract painting at Cornaro Arts Institute under the guidance of Andros Efstathiou, a notable Cypriot contemporary abstract artist. In addition, I learned contemporary free-style, Japanese-influenced ceramics in a series of workshops.

In 2018 I have held my first solo multidisciplinary art exhibition - "Anatomy of Sin", comprising mixed media paintings, installations from recycables, ceramic sculpture and poetry. More information can be found on: https://anatomyofsin.wordpress.com

Being especially interested in contemporary mediums and conceptual styles, I derive my inspiration from avant-guard influences, asymmetry and imperfection, textures, largely focusing on wabi-sabi aesthetics and an unexpected fusion of quite often uncongenial elements.

After continuous experimentation I have arrived to a gestural/action painting approach as I believe a work of art is a story, being told during the process of creation and therefore, all the elements such as markings and strokes, layers of paint, revealing underneath layers are all parts of that story. I always experiment with different media as it allows to add variety and texture to my work. All constituents of a painting blend together in one abstract image and at the same time are juxtapositioned randomly in order to evoke unexpected associations and sensations, allowing them to interact with the viewer...

scar - a mark left on the skin or within body tissue where a wound, burn, or sore has not healed completely and fibrous connective tissue has developed ... (def.)

The series represents a visual and contextual exploration of scars as a concept . Scarring may occur on various levels - anatomic, psychosomatic, emotional, environmental, touching upon animate and inanimate objects. In essence, a scar is a recollection, a permanent mark and reminder of events of the past, forever changing the initial prototype, whether it comes to physical scars, emotional wounds or any material substance. In the same context, construction and excavation projects may be also considered as "scars" on the face of the earth, or drawings and etchings on paper or other surfaces ...

Although, scars are conventionally viewed as something negative both in individual perception and in society , they can also be synonymous of growth, metamorphosis and healing. Whilst partially referencing the pain and the suffering associated with scarring, this study reflects on the topic in a rather neutral context, viewing it in both positive and negative aspect, as a memory, both individual and collective, a visual anamnesis of the past.

The imagery for the series is inspired by the visually fascinating aspect of scar healing, focusing on the four stages - hemostasis, inflammatory, proliferative, and maturation. At the same time, this abstract representation suggests actions or events, urban surroundings, referencing ecological and oppidan issues, drawing parallels between conscious and subliminal, physical and psychological states, human nature and the surrounding environment, internal and external ...

Gestural / action painting approach allows me to express the theme on a deeper level. Energetic movement of the brush, violent strokes and subtle smudges as well as spontaneously random etchings reveal all the intensity and emotional nuances and the progressive dynamic of scar formation and healing over time.