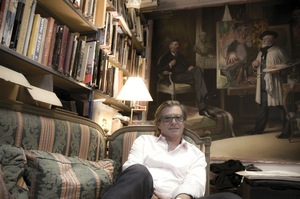 A trained architect, THIERRY BRUET born in Paris in 1949, painter and sculptor for more than 35 years is a Master of the traditional technique of oil-base painting, specialising in large portraits of well-known figures in society and decorative monumental works. Commissioned by famous decorators such as Alberto Pinto, Frederic Méchiche, and Pierre-Yves Rochon…

Thierry Bruet dreams to tell a story of time which gets through its paintings and its) sculptures, he likes building big formats, , he likes playing on the illusion, the mockery, the contrast between the beautiful and the ugly.

TRIBUTE to my Favorite artists

Tribute to my Favorite artists