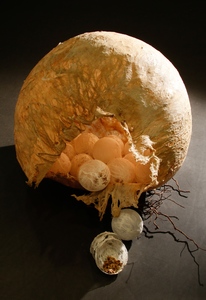 Frances Vye Wilson was born in Victoria, British Columbia, Canada. She was strongly influenced by her family of contemporary artists working in a variety of media. In her 20’s, she studied fine art and choreography at Simon Fraser University in Vancouver, British Columbia. She went on to spend much of her life in the film and television industry as a member of the Screen Actors Guild, a theatre producer for the Actors Studio and founder of a film production company, New Century Filmworks. A 12 year immersive study of the Japanese art form Ikebana culminated in two exhibits at the Metropolitan Museum of Art. She returned again in 2013 to New York to pursue her passion for art and in particular, sculpture, studying sculpture and mixed media at the National Academy Museum and New York School of Art.
She is presently residing in the West Village, NYC and works at her studio on West 29th St., NYC.