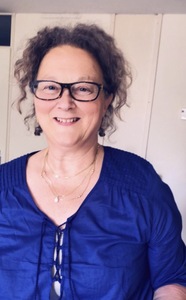 Lia is a dutch artist who graduated from two European artschools. She exhibits mainly on the European continent and her work has found its place in many private collections throughout the years.

Her work in which the human figure plays the major role, is imbued with nostalgic poetry, contemplation and (subdued) emotion. 'I try to express an existential feeling without wanting to force upon the viewer an explicit message.'

It’s about inability, vulnerability and strength, acquiescence, comfort and longing. It represents the moment in time in which the size of one’s longing and an awareness of one’s human condition melt together.
The longing for instance for a symbiosis with another human being and the awareness of one’s existential loneliness.
The awareness – which often comes through shame and blame – that the highest form of togetherness one can reach in human relationships is that of ‘intimate strangers’. The awareness that man will remain an ‘intimate stranger’ even to himself; never knowing what he’ll be capable of doing, if only…and never knowing the unconscious forces that drive him.

One could say that she explores human fragility.

She wants to pin down the things she senses in an image. Knowing that she can catch the moment in an image that transcends itself, while at the same time the full impact of it escapes one’s mind.

All this, while realising that the mystery is bigger than man.

For inspiration she often make use of existing pictures from different sources such as internet, advertisements, newspapers, magazines and her personal photoalbum. She searches for them and sometimes she accidentally runs into them. She then reinterprets these pictures; changes the context, puts things in and out and use different elements from different sources next to each other and through one another. Leading is her own emotion, pictural and/or narrative elements, sometimes combined with (a phrase out of) an existing poem. All this combined with a variety of materials, carriers and formats.

She hopes the viewer of her work will find some kind of recognition on an emotional level.

This series speaks about human beings that are filled with thoughts and emotions and find their ways of coping with (the hardships of) life.

This woman is standing there, while being present in body she s absent in mind.
Mixed media on canvas with a resin topcoat, 100x100x3cm. See for more work liakok.nl

The woman stands present in body while being absent in mind, finding ways to cope with (the hardships of) life.
Mixed media on canvas with a resin topcoat, 100x100x30cm. See for more work liakok.nl

While being present in mind, he s absent in mind; wandering off to far away places and taking pleasure in what he encounters in his minds world.
Mixed media on canvas with a resin topcoat, 120x80cm. See for more work liakok.nl

While his mind wanders off to far away places, he s present in body.
Mixed media on canvas with a resin topcoat, 60x50x3cm. See for more work liakok.nl

“All that you can leave behind”

Sitting there and wondering about major decisions that sometimes have to be taken in life.
Mixed media on canvas with resin topcoat, 90x100x2cm. See for more work liakok.nl