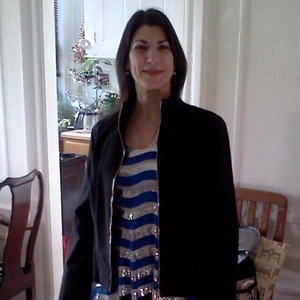 Lisa M. Zilker is an artist living and working in New York City. Born in Queens and raised in New York, she attended the School of Visual Arts, where she received her BFA in Fine Arts and Art Education with a minor in Psychology. She has shown in many solo and group shows, including a one-person show at the National Arts Club, NY. Her artwork falls into two categories; abstract expressionism and surrealism.

One of Zilker’s important series, called “Monuments,” began as the sequence named ”Tombstones.” and has evolved into what she calls portals. These portals usually exist as surreal landscapes that have been abstracted. In these works, the audience is either looking into or thru an opening, glimpsing a hidden place: a space where objects present figurative organic qualities and simplified botanical shapes. As such, they can be considered otherworldly or universal destinations; at other times, they are in plain sight in our reality. They are a visual depiction of mental energy and present an energetic connection between our planet and the cosmos.

These portals are grouped in threes, thus symbolizing Unity, the Trinity, Family, and Community: these notions, Zilker feels, never stand alone. Thus, the “Monuments” represent a birth/death cycle, visually simplified as a footprint or handprint. The Entities that are consequently suggested in this art are represented by the portals, but they are not always visible.

Sometimes, in Zilker’s art, the depiction of longitude and latitude provides a sense of place – the grid – while the jagged splits we encounter represents noise. This noise arises from interactions beyond our control. The sources of this noise are planetary, mental, emotional, physical, and metaphysical. When the grid is removed, we are only left with noise, but beyond and around it, we experience change, growth, and new life. In summary, it can be said that the practice of simplifying a complex idea, issue, or condition, including its minimalization, obscuring, or distortion, is central to Zilker’s artistic practice.