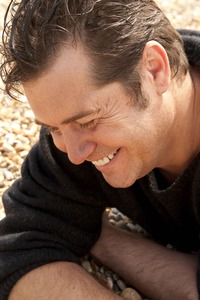 As an artist I respond to everything around me, a door is opened to an inner world where the soul is revealed; past, present, and future intertwines. Like dreams, my paintings come from a deep creative source. Mythic images emerge and stories are told, reflections briefly glimpsed along the journey. - Mitchel Barrett

"Barrett emphasizes the contrast of light and dark, his figures are part of an elaborate, eclectic setting which contains a mixture of precise linear passages and painterly suggestive ones.

The lengthy and painstaking creative process of his work, illustrates Barrett's belief that the artist should always aspire to balance inspiration and intellect, imagination and revelation.

In his exploration of the mythological idea of man's union with the divine, his figures are enhanced with symbols of sexual potency and eternal power from Occidental, Oriental and occult traditions.

In brief, through his neo-Platonic visual exploration, Barrett is seeking comprehensive answers to the essential dilemmas of life."

Born in 1960, Barrett studied art at Stafford College of Art and Design in 1980 and then traveled for over a decade through Asia and Europe as a fashion model.; In 1997 -1999: Bournemouth and Poole College of Art and Design studied film and tv production, screen writing and directing and in 2000-2001: screenwriting and directing at the Hochschule fur Film und Fersehen in Munich, Germany.2002-2004:
Back to studies again in art with a wonderful opportunity of learning from a Master, Prof. Ernst Fuchs from Austria, during the time spent in his studio in France, he learnt the old masters technique, using egg tempera and oil glazes; 2010: Ginger Gilmour, sculpture techniques; 2011: The Heatherley School of Fine Art, Chelsea. (both UK), ceramic sculpture.

Barrett’s works has influences from travels to the far East and echoes of William Blake, Klimt, Dali, and the English Pre-Raphaelite Brotherhood. His work is collected by important private collectors around the world from England, France, Austria, Germany, Japan, Thailand, USA and Canada. He continues to create new works, all of which are widely sought after.
He is a painter, sculptor, writer, even filmaker ; 'the mask' shown on www.youtube.com (a Surreal hybrid allegory about the illusions with which we all proudly disguise ourselves. The story is centered on the artist, who enters the scene for a Tarot card reading........')

Every picture tells a story

The paintings ‘Sakura Kiss’ and ‘the Doors’ are in amalgamation with a story I have been working on for a number of years, ‘The Dreams of Frankie Cameron’.

Frankie Cameron is an artist living in Paris. Desperate for a quick fix to find inspiration, he experiments by mixing the seeds of an Amazonian plant with a white powdered pigment used in his paintings. He creates a powder that becomes a potent hallucinogenic drug that enables his dreams to directly come into reality as paintings.

Granted fulfilment of his desires, heightened power and with a growing demand for his new paintings; he becomes addicted to the drug. Illusion, reality and time become distorted, a world of dark dreams flood into his life and finally experiences of mental instability.

It is a story of conflict between the Ego and a search for a Soul, about the duality that is within us all and becomes one of redemption and insight.